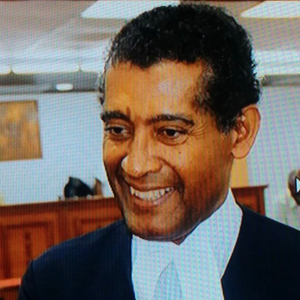 Delano Frank Bart KC is a lawyer,  a former Attorney General, Minister of Justice and Legal Affairs of  St. Kitts and Nevis,  and a former Permanent Representative and Ambassador Extraordinary Plenipotentiary to the United Nations Mission in New York for St. Kitts and Nevis.

Bart was educated at the Basseterre Senior School St. Kitts, Matthew Boulton College Birmingham, Queen Mary College University of London(“QMCL”), and the Inns of Court School of Law in London(“ ICSL”). He received his LL.B ( Hons) from QMCL and his Barristers Certificate from ICSL.

He is admitted the Bar of England and Wales,  and has pre-audience  rights of  practice at the Inner Bar of the courts of Antigua and Barbuda, the Commonwealth of Dominica, Grenada, Saint Christopher and Nevis, Saint Lucia, and Saint Vincent and the Grenadines.

Bart has practiced law for nearly two decades at the English Bar in London; served for over a decade as a member of the Federal Parliament and Cabinet  of Saint Kitts and Nevis; just short of a decade as the Permanent Representative and Ambassador to the United Nations Mission in New York for St. Kitts and Nevis. He is presently in private practice.

His experience includes service as a member of several  bodies and committees in and of the Caribbean region, including the Legal Affairs Committee of both the Organisation of Eastern Caribbean States (OECS) the Caribbean Community Secretariat (CARICOM); the Council of Legal Education for the West Indies Schools of Law, and its’ executive Board. He has represented his country at several summits, numerous regional and international forums, including  several Commonwealth Law Ministers conferences, and as counsel in the courts of his country’s  jurisdictions including the Judicial Committee of the Privy Council, and in negotiations of several International Treaties and Agreements, including Extradition, Tax Information Exchange, Mutual Legal Assistance Treaties, and the Agreement establishing the Caribbean Court of Justice(“CCJ”) and its’ Trust Fund.

Since 2005  he has  been attending Commonwealth Law Conferences (“CLC”). He shares the objectives and aims of the Commonwealth Lawyers Association(CLA).  He  has encouraged Lawyers from the Caribbean region to join the CLA attend the CLCs and become active in the activities of the CLA. As a result  there was the largest Caribbean contingent from  the OECS in attendance at the  Zambia CLC. Had it not been for the pandemic there certainly would have been an even larger contingent in attendance at the Bahamas CLC this year.

It is his view that the Caribbean should become more active in the affairs of the Association and with his background and experience, if elected, he will continue to do his best to make that happen and will be willing to use his  skills and experience for the benefit of the CLA.