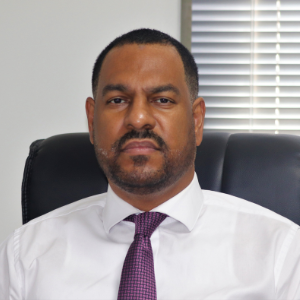 Dr. John Gerald Farouk Carey has over 28 years’ experience in the public and private sectors in the Caribbean and the Pacific Islands. John has lectured at Northern Caribbean University, Jamaica and University College of the Cayman Islands, Cayman. He is the Executive Director and Board Secretary for the Papua New Guinea Centre for Judicial Excellence (PNGCJE) based in Port Moresby, Papua New Guinea. In this role, John is responsible for Judicial Education and Training of Judges, Magistrates, Court staff and the provision of continuing professional development opportunities for the law and justice sector in 15 countries in the Pacific Islands.

He is extensively involved in academic research in the area of Access to Justice. He is also a lawyer with practicing certificate in the Cayman Islands and admitted to Fiji as a Barrister and Solicitor. He is also qualified for admission in the Commonwealth Caribbean. He has completed the Mediation Skills Training to The National Mediator Accreditation Standards (NMAS) of Australia and is in the process of being an accredited Mediator in Papua New Guinea. He has written on subjects such as judicial education, gender equality, and constitutional matters in the Bahamas and Papua New Guinea and has also been appointed an adjunct Professor of International Law at Michael University.

John has a Diploma in Pre-Engineering, BSE in Mechanical Engineering, LLB(Hons), PPC in Legal Practice, Legal Education Certificate, MBA in Finance, Professional Diploma in Legislative Drafting, PhD in Law and is completing a PhD in Business with a focus on Tourism.