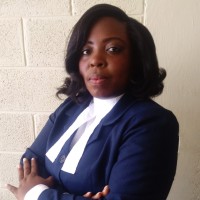 Ms. Korah Galloway is a practising Attorney-at-Law, and the Principal at the law firm of Voithia Outreach Limited, Montserrat.  Ms. Galloway’s areas of specialism include Civil Litigation, Probate, Family Law and Conveyancing.  She is a Mediator on the Montserrat Roster of High Court Mediators.  Ms. Galloway also has experience in Criminal Law having worked with the Government of Montserrat for four years as a Criminal Prosecutor.

Ms. Galloway is the President of the Montserrat Bar Association.  This is her fourth year on the Council of the Montserrat Bar Association and her first term as President.  Prior to being President she served as Treasurer and Secretary.  She serves on the National Mediation Committee for Montserrat and also Chairs the Outreach Sub-Committee.  She hosts a radio programme titled Resolving Disputes on the local radio station, ZJB, promoting mediation.  As a Public Speaker she has spoken at numerous engagements including the Ceremonial Opening of the Eastern Caribbean Supreme Court Law Year (2020 and 2021) and other Special Sittings of the Eastern Caribbean Supreme Court.

Ms. Galloway has the unique experience of having practised in three different jurisdictions, England, Bahamas and Montserrat.  During her time as a Local Government Lawyer in England she was a member of Lawyers in Local Government, where she regularly attended and participated in training and events.  She was an Ambassador for Essex Legal Services promoting shared legal services and partnerships between multiple local authorities and public and private bodies. She also provided legal services and training to other local authorities through her various secondments.

During the course of her varied career Ms. Galloway has always sought to be a positive influence towards others and foster rewarding collaborations.  She did a six-month internship at the Eugene Dupuch Law School Legal Aid Clinic in the Bahamas which was extended on completion for a further three months because of her strong work ethic and commitment to serving members of the community.  She is a great believer in community involvement.  As such, it is her desire to contribute in a meaningful way to the development of the Commonwealth through her membership on the Council of the Commonwealth Lawyers Association.

The above experience is what she brings to the Council of the Commonwealth Lawyers Association.