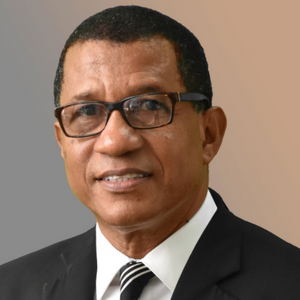 Ruggles Ferguson is a graduate of the University of the West Indies (Faculty of Law) and the Hugh Wooding Law School (Trinidad). He has been in private practice for the past 25 years (from 1996), focusing on criminal, civil and constitutional law. He has been involved in dozens of judicial review and constitutional applications covering a wide spectrum.  For the past 21 years he has been the Managing Partner of Ciboney Chambers, one of the larger law firms in Grenada.

He believes that umbrella bar associations like OCCBA and the CLA have a critical role to play in uniting lawyers throughout the region and beyond to make a positive difference on the global stage. OCCBA supports the work CLA.

Mr Ferguson has appeared at all levels of the court, including the Judicial Committee of the Privy Council and the Original Jurisdiction of the Caribbean Court of Justice.  He is admitted to the Bars of Grenada, St Vincent & the Grenadines, St Lucia, Dominica, Antigua  & Barbuda, St Kitts & Nevis,  British Virgin Islands (BVI) and the Republic of Trinidad & Tobago.