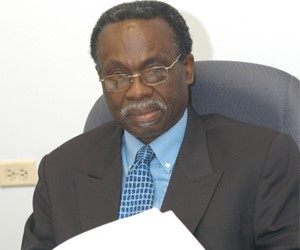 The Hon Lloyd Barnett O.J., B.A., LL.B.(Hons.), LL.M., Ph.D.(London), LL.D.(Hons.)(UTech.), LL.D.(Hons)(UWI) is a national of Jamaica and a practising attorney-at-law. Dr. Barnett has appeared as Counsel in several important cases in public, commercial and property law in the superior courts of Jamaica and several Caribbean countries as well as the Privy Council and the Caribbean Court of Justice.

He was a founding member of the Jamaican Bar Association, serving as its President on two separate occasions.  Among other organisations, Dr. Barnett was Chairman of the General Legal Council, the Jamaican Council for Human Rights, the University Council of Jamaica and the Caribbean Council of Legal Education (CLE) and is the Chairman of Citizens Action For Free and Fair Elections (CAFFE).  He also served as President of the Organization of Commonwealth Caribbean Bar Associations (OCCBA) and has represented the private Bar on the Rules Committee of the Supreme Court.  He is the author of two books on Jamaica’s Constitution and numerous articles on legal subjects, which have earned him the respect of judicial and academic authorities.  Dr. Barnett was a Member of The Regional Judicial and Legal Services Commission at its inception and Deputy Chairman from 2012 to 2016.  He has been a civil society leader, human rights advocate and served as a Senator in the Parliament of Jamaica.

In 1999 Dr. Barnett was awarded a Jamaican National Honour, the Order of Jamaica, for his outstanding contribution in the field of jurisprudence in the Region.  Both the University of Technology and the University of the West Indies have conferred the honorary doctorate in law (LL.D.) on Dr. Barnett.  In 2006 the CLE launched the Annual Dr. Lloyd Barnett Lecture Series in his honour.