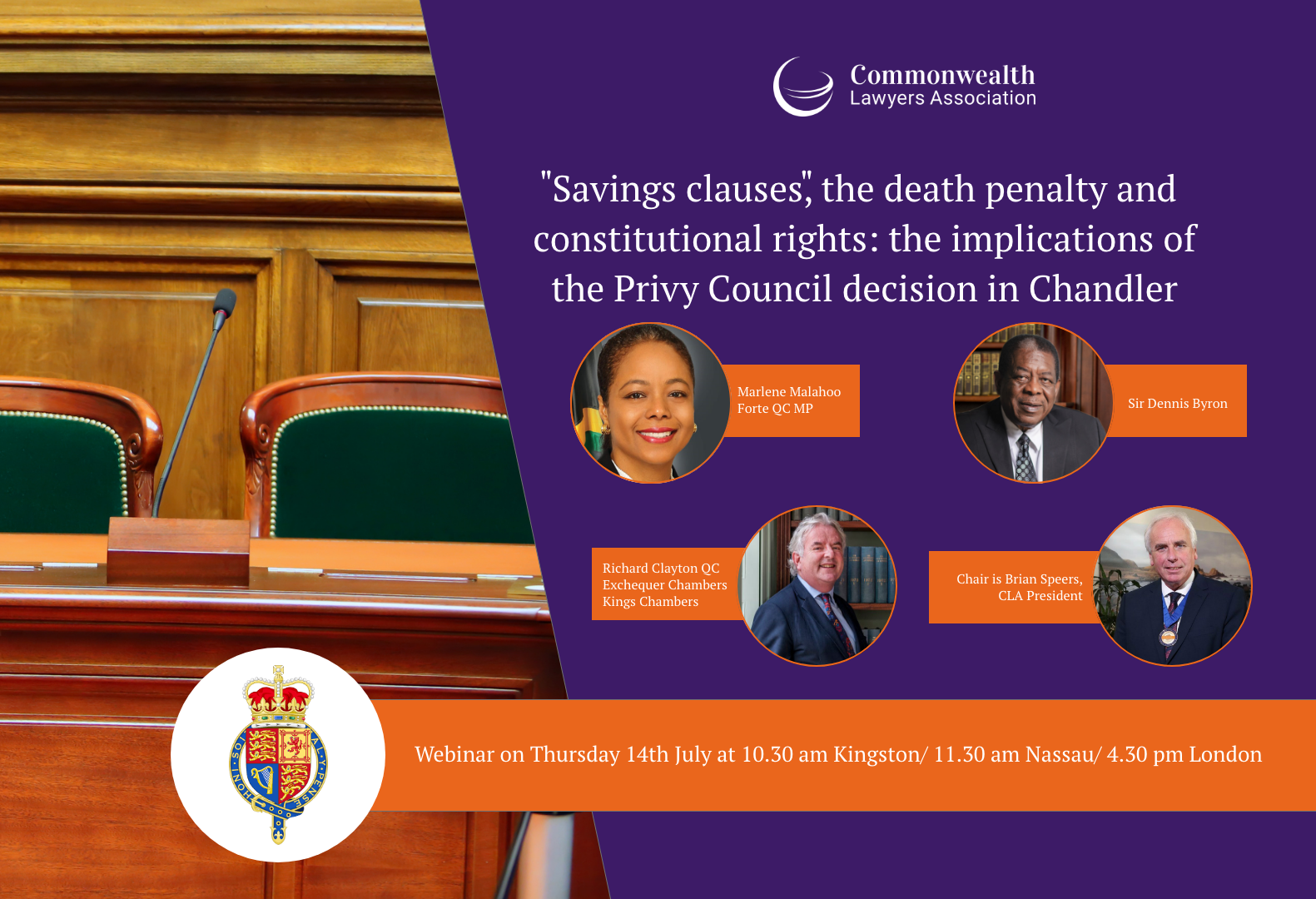 The CLA presents “Savings clauses”, the death penalty and constitutional rights – the implications of the Privy Council decision in Chandler

Join the CLA at a webinar exploring “Savings clauses”, the death penalty and constitutional rights – the implications of the Privy Council decision in Chandler

Marlene Malahoo Forte QC MP (Jamaica), Sir Dennis Byron (St Kitts and Nevis) and Richard Clayton QC (England) will discuss the status of “Saved laws” and whether they should be retained, even if violative of fundamental rights.

The webinar will be a timely discussion of the implications of the recent Chandler case before the Privy Council which upheld the mandatory death penalty in Trinidad.

There will be an opportunity for a Q &A with the Panel at the end of the webinar via the chat function.

Marlene Malahoo Forte QC MP is the former Attorney General of Jamaica and has been a Member of Parliament since 2016.  She is now a fourth term legislator who was recruited to politics directly by a sitting Prime Minister. From her early years at the public bar she has been highly regarded as a formidable, fair and fearless prosecutor who has had an enviably high success rate in the trial and appellate courts.

Today, she continues to appear in court mostly before the Judicial Committee of Her Majesty’s Privy Council in cases of high public importance for the government.  As presenter and executive producer of her own prime daytime call-in radio talk show “JUSTICE”, with live internet stream, she has debated with countless listeners at home and abroad on wide ranging legal and political issues and current affairs.  She was a recipient the Hon. Justice James Kerr Award for Excellence in Public Service (2017), is named amongst the “WHO’S WHO” in Jamaica and is a past Chairman of United Way’s Women’s Leadership Initiative.  She is a Fellow of the Chartered Institute of Arbitrators (London, England) and is a Yale World Fellow (Yale University (USA).

Sir Dennis Byron was President of the Caribbean Court of Justice (2011-2018), former Chief Justice of the Eastern Caribbean Supreme Court (1999-2009) and has been Chairman of the Commonwealth Judicial Education Institute in Halifax, Canada since 2000.

The Conference of Heads of Judiciaries of the Caribbean has described Sir Dennis as a judge of “amazing leadership and scholarship” who “has been a burst of talent, energy and stamina” and has made a “rich and sterling contribution to the jurisprudence of the Caribbean.”

His judicial career began in 1982, age 38, when he was appointed as a High Court Judge of the Eastern Caribbean Supreme Court. He was soon frequently sitting as a Court of Appeal Judge in an acting capacity before being appointed a substantive member of the Court of Appeal in 1990.

His 36 years of adjudication have bequeathed an unparalleled jurisprudential legacy. The president of the Organization of Commonwealth Caribbean Bar Associations described Sir Dennis as having a “sharp intellect” and being “a truly international legal icon”.

In 1986, he famously presided over the celebrated case of the Grenada 17 accused of assassinating Prime Minister Maurice Bishop of Grenada – the longest criminal trial in Caribbean history.

As Chief Justice of the Eastern Caribbean Supreme Court he launched the Judicial Education Institute, produced its Code of Ethics and was the first Chief Justice to implement the English-modelled Civil Procedure Rules in the Caribbean region. The President of the CCJ describes him as “a great judicial reformer” who had “boundless enthusiasm, indefatigable zeal, vision and bold leadership”.

Another colleague on the CCJ described him as leading “spectacular procedural and technological reforms to judicial systems, improving their accessibility and efficiency”.

His international work includes judicial education programmes for the Haitian Judiciary (1995) and membership of a fact-finding mission to investigate abuses against the Rule of Law in Zimbabwe on behalf of the Human Rights Institute of the International Bar Association (2001).

Sir Dennis has written many publications and has been a keynote speaker and guest lecturer at renowned events and conferences across several continents, including the 9th Annual Ruth Steinkraus-Cohen International Law Lecture of the United Nations Association of London hosted by the School of Oriental and African Studies of the University of London.

Chief Justice of the Eastern Caribbean Supreme Court, Dame Janice Pereira, described Sir Dennis as “one of the greatest jurists from the CARICOM region and beyond, his legacy contained in a rich body of judicial pronouncements in every respect immortalized”.
Sir Dennis was recently biographed in Sir Dennis Byron: Law Legend by Dr. Francis Alexis.

Richard Clayton QC practises from London, England. He undertakes many Supreme Court/ Privy Council appeals, practising in public, constitutional and commercial law. His four Privy Council appeals in 2021 include a Bahamas constitutional challenge to security for costs for disproportionately restricting access to the Court and he also represents the AG of Anguilla in compulsory purchase compensation appeal.

Richard successfully represented former Prime Minister, Basdeo Panday before the Trinidad CA and was lead Counsel in the 8-day Court of Appeal case for the former Chief Minister of Turks & Caicos, Michael Misick and his cabinet. He was recently instructed in Trinidad in the cartel case and successfully defended judicial review against a Commission of Inquiry.

Richard has been a Deputy High Court Judge since 2011. From 2011-2019 he was the United Kingdom’s representative to the Council of Europe’s advisory body on constitutional law, the Venice Commission. Richard is a former Chairman of the Constitutional and Administrative Bar Association, a Visiting Professor at University College, London and joint author of the Law of Human Rights (Oxford University Press) cited by the Supreme Court about 45 times.