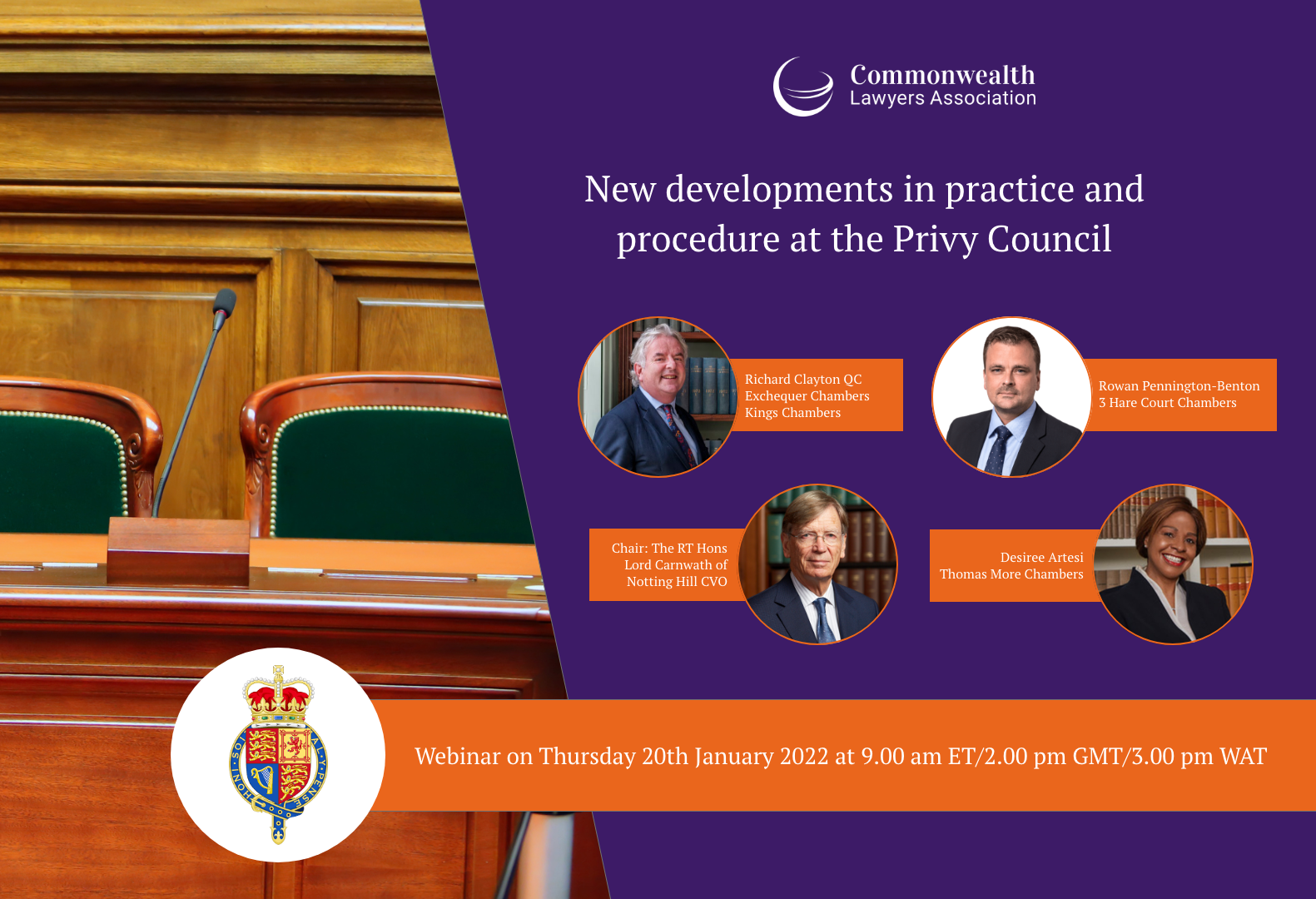 Registration is now open for the final webinar in this popular series exploring the work of the Privy Council.

The Commonwealth Lawyers Association  invites you to join us for a discussion chaired by Lord Carnwath of Notting Hill CVO and led by Richard Clayton QC, Rowan Pennington-Benton and Desiree Artesi with a focus on  practitioners who bring (or wish to bring) appeals to the Privy Council.

Our panellists Richard Clayton and Rowan Pennington-Benton will be speaking about the Privy Council’s established practice of not interfering with “concurrent findings of fact” made by the courts below (Court of Appeal and the trial court). This issue very often arises, including in case where the Court of Appeal does not actually make any findings of fact. Our expert speakers will explain the practice, when it arises, exceptions to it and – crucially – how to take advantage of those exceptions: what arguments to deploy, how to persuade their Lordships to grant leave in the face of concurrent findings, and how best to use the established case law to your advantage.

We are excited to have Desiree Artesi joining our panel, an expert barrister in the fields of commercial law, property, international and appeals to the Privy Council. Desiree will be speaking about appeals to the Privy Council as of right, when nonetheless the Court of Appeal may refuse to grant leave, how to deal with the point if raised locally, and how to deal with it before the Board. She will consider the leading cases in this area, and provide useful insight, practical tips and advice on how to address this difficult and increasingly common practice.

Finally, Lord Carnwath – Justice of the UK Supreme Court /Privy Council for 8 years and a judge for much longer than that – will be offering some insider tips, tactics and practical advice on how to present and argue a Privy Council case.

There will be a Q and A opportunity following our panel discussion. Should you wish to submit a question prior to the session, please email info@commonwealthlawyers.com referencing this event. Questions can also be submitted using the Q&A function during the webinar itself.

Desiree was called to the Bar of England Wales in October 1998 by Inner Temple. Desiree has a predominantly Privy Council practice.

Desiree also has a diverse civil and commercial practice, including all aspects of property, public law and judicial review. Desiree has a particular interest in international commercial arbitration with a focus on Caribbean and North American jurisdictions. Desiree is a member of the Caribbean Group of Arbitrators.

Desiree was called to the Bar in St Lucia with the ability to practice throughout the Eastern Caribbean Supreme Court.

Desiree was appointed as a Bencher to the Honourable Society of Inner Temple.

Desiree has a particular interest in the challenges faced by small jurisdictions and is an Associate of the Island Rights Initiative, a consultancy and think tank dedicated to helping small island communities facing global human rights challenges. www.islandrights.org/about-us/

Desiree is an affiliate expert of the Centre for Law and Social Justice at Leeds University and has a keen interest in social justice issues.