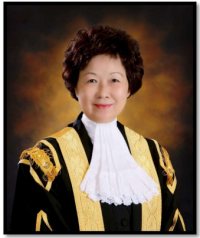 Justice Dato’ Mary Lim Thiam Suan read law at the University of Leeds, UK and graduated with a LLB (Hons) degree. She has been admitted to Lincoln’s Inn as a Barrister-at-law. In 1993 she obtained her Master of Laws degree from the University of Western Australia. Prior to her elevation to the High Court of Malaya where she sat in the New Commercial Court, her Ladyship served in various capacities at the Attorney General’s Chambers of Malaysia. These include as Federal Counsel, Senior Federal Counsel, Senior Assistant Parliamentary Draftsman, Legal Advisor to the State of Negeri Sembilan, Deputy Head of Civil Division and Commissioner of Law Revision and Law Reform. Justice Lim was the first judge of the Construction Court in Kuala Lumpur until her Ladyship’s elevation to the Court of Appeal. She is now a Judge of the Federal Court of Malaysia. Justice Lim is an ardent believer in judicial and legal training and is a qualified advocacy trainer with the Bar Council Malaysia as well as a member of the international faculty advocacy trainers. She has conducted numerous workshops on criminal, civil and appellate advocacy and has twice taught at the Advanced Advocacy Course at Keble College, Oxford. She has also delivered many public lectures on various topics associated with the law, both nationally and internationally.