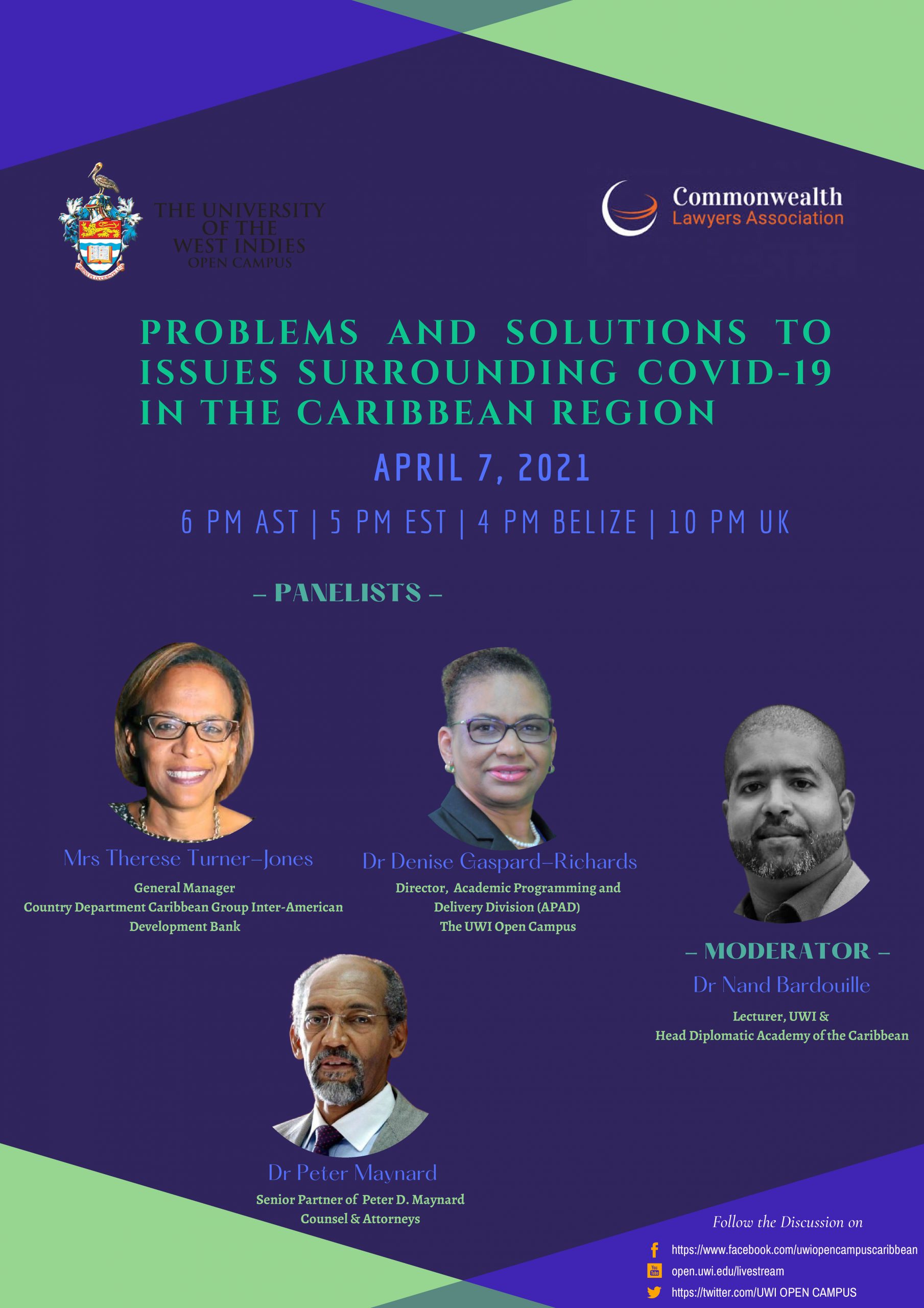 The CLA and the University of the West Indies Open Campus co-convened webinar : Problems and Solutions to issues surrounding Covid-19 in the Caribbean region

Register to join the Commonwealth Lawyers Association (CLA) and the University of the West Indies in this co-convened  webinar exploring the problems and solutions to issues relating to Covid-19 in the Caribbean. The distinguished panel will give their perspectives  with particular reference to the economic, educational and legal sectors.

We look forward to welcoming attendees for the session which is available across 3 social media platforms . There will be a Q and A opportunity following our panellist contributions.

Dr. Nand C. Bardouille heads the Diplomatic Academy of the Caribbean (DAOC), coordinating teaching, research and analyses on and in support of diplomacy in the sustainable development of Caribbean Small Island Developing States. Dr. Bardouille leads the DAOC, the Caribbean’s premier professional development-oriented diplomatic studies training centre, overseeing the development and implementation of its work programme. It covers training and capacity development in diplomatic and international studies, as well as research, dialogue and advocacy work on the nexus between the Caribbean and diplomacy. He is also a concurrent faculty member in the Institute of International Relations at The University of the West Indies (The UWI), serving as Lecturer in Methodology and Theory of International Relations. Prior to joining The UWI, Dr. Bardouille briefly worked in the management consulting space, specializing in the areas of international development and higher education. Before that, he was a Visiting Professor–International Relations of Small Island States at the University of Prince Edward Island’s Master of Arts in Island Studies (MAIS) Program. Previously, Dr. Bardouille served as a senior trade official for over twelve years with the Caribbean Community (CARICOM) Secretariat, the Caribbean Regional Negotiating Machinery (now the Office of Trade Negotiations of the CARICOM Secretariat) and the Organisation of Eastern Caribbean States (OECS) Secretariat (now the OECS Commission). He contributed to the formulation and delivery of programmes/projects to enhance regional development processes of Caribbean small states, coordinating strategic engagement/partnerships among intergovernmental organizations in support of and advising governments on foreign/trade, regional integration and development cooperation policymaking. Dr. Bardouille has also held social sciences teaching appointments at higher
education institutions, and briefly worked with the United Nations. Dr. Bardouille’s teaching and research focus is on International Relations and Comparative Politics, with a regional focus on the Caribbean. He specializes in and has published on the diplomacy, foreign policy and international economic relations of small states.

Dr Francis Severin holds the Office of Deputy Principal of The UWI Open Campus. Prior to this, he served as the Director of the Open Campus’ largest and most distributed division, the Open Campus Country Sites (OCCS), for over ten years. As someone who has dedicated his professional life to education, Dr Severin, a Dominican national, has lived and worked in several Caribbean islands and has led many initiatives and served on numerous Campus and University boards and committees during his tenure. He has been Resident Tutor and Head, School of Continuing Studies and Head of Open Campus in Dominica. In his role as Deputy Principal, he chairs several committees including, inter alia, Evaluations and Promotions Committee (EPC), Campus ITC Steering Committee, the Campus Quality Management Team (C-QMT) and Academic Board Sub-Committee on Student Matters (ABSCSM). Dr Severin has been the Public Orator of the Open Campus since 2010. He is the first male to hold the Office of Deputy Principal of the Open Campus.

Ms. Therese Turner-Jones is the General Manager of the Country Department Caribbean Group (CCB), which oversees the Bank´s operations in Barbados, Guyana, Jamaica, Suriname, The Bahamas, and Trinidad and Tobago. While serving in this position, she will continue to carry out the functions of Country Representative for Jamaica. Mrs. Turner-Jones joined the IDB in 2013 as the Country Representative in Jamaica. She has over 20 years of experience in the areas of macroeconomics and economic development, with particular emphasis on the Caribbean. She has held key position in the International Monetary Fund (IMF) including, most recently, as Deputy Division Chief for the Caribbean II Division, Western Hemisphere Department, and previously as Advisor to the Executive Director for Canada, Ireland, and the Caribbean. Previous to her work at the IMF, she was Deputy Manager of the Research Department for the Central Bank of The Bahamas. Ms. Therese Turner-Jones is an economist who graduated from the University of Toronto and holds a master´s degree in economics from the University of East Anglia, United Kingdom. She is a United World Colleges graduate (Lester Pearson College).

Denise Gaspard-Richards, PhD is the Director of the Academic Programming and Delivery Division at the University of the West Indies, Open Campus. Dr. Gaspard-Richards has over twenty years’ experience as an educator having worked in capacities that span teaching in both face to face and online modes, strategic planning and institutional research in higher education, academic programme coordination, and the design, development and delivery of online and distance education programmes and courses.

Peter Maynard, Senior Partner of Peter D. Maynard, Counsel & Attorneys, is highly regarded in the fields of international commercial litigation, arbitration, and asset tracing and recovery. He has practiced law as a litigator for 42 years and acted as an arbitrator and arbitration counsel for over 3 decades. His bio includes: Member of the Latin American and Caribbean Council of the London Court of International Arbitration (LCIA), Fellow and Chair of the Bahamas Branch of the Chartered Institute of Arbitrators (CIArb), and sole, presiding and party-appointed arbitrator, counsel or adviser in domestic and international commercial arbitrations (ad hoc, LCIA,ICC and UNCITRAL) relating to, inter alia, banking, construction, financial services, hotels, labour, maritime, provident funds, resorts, tourism and trusts. He was acting Bahamas Supreme Court Justice, well known for implementing efficient case management, dealing with cases without delay, and completely eliminating the pre-existing backlog of civil and commercial cases before Freeport and the Northern Region of the Supreme Court for which he was responsible. He is currently Head of the Law Department of the University of The Bahamas, and course director of Arbitration. He was formerly a law lecturer at other institutions such as the University of the West Indies (Cave Hill) and the Eugene Dupuch Law School (Nassau). He was also an economist at the United Nations, New York, and later a diplomat there before turning to practice in commercial arbitration and civil litigation. He was Legal Adviser, Bahamas Ministry of Foreign Affairs, Guest Scholar at the Brookings Institution Washington D.C., President of the Bahamas Bar Association and of the Organization of Commonwealth Caribbean Bar Associations. He is past Chair of one of the two Divisions of the International Bar Association (IBA) – the Public and Professional Interest Division – and is Bahamas National President for the World Jurist Association. He was also a newspaper columnist for 20 years, Vice Chair of the Bahamas Financial Services Board, co-editor of the book “Poverty Justice and the Rule of Law” he prepared in 2013 for the IBA, downloadable free of charge on the IBA website: www.ibanet.org/PresidentialTaskForceFinancialCrisis2013.aspx, and Past Chair of the IBA Working Group on Poverty, Empowerment and the Rule of Law. A frequently referenced article of his: “International and Regional Commercial Arbitration Hubs: Atlantic Tigers or Caribbean Basin Pussycats?” which appeared in the Caribbean Law Review (2014) 20 Carib. L.R. (36-52).

The Commonwealth Lawyers Association.
The University of the West Indies Open Campus