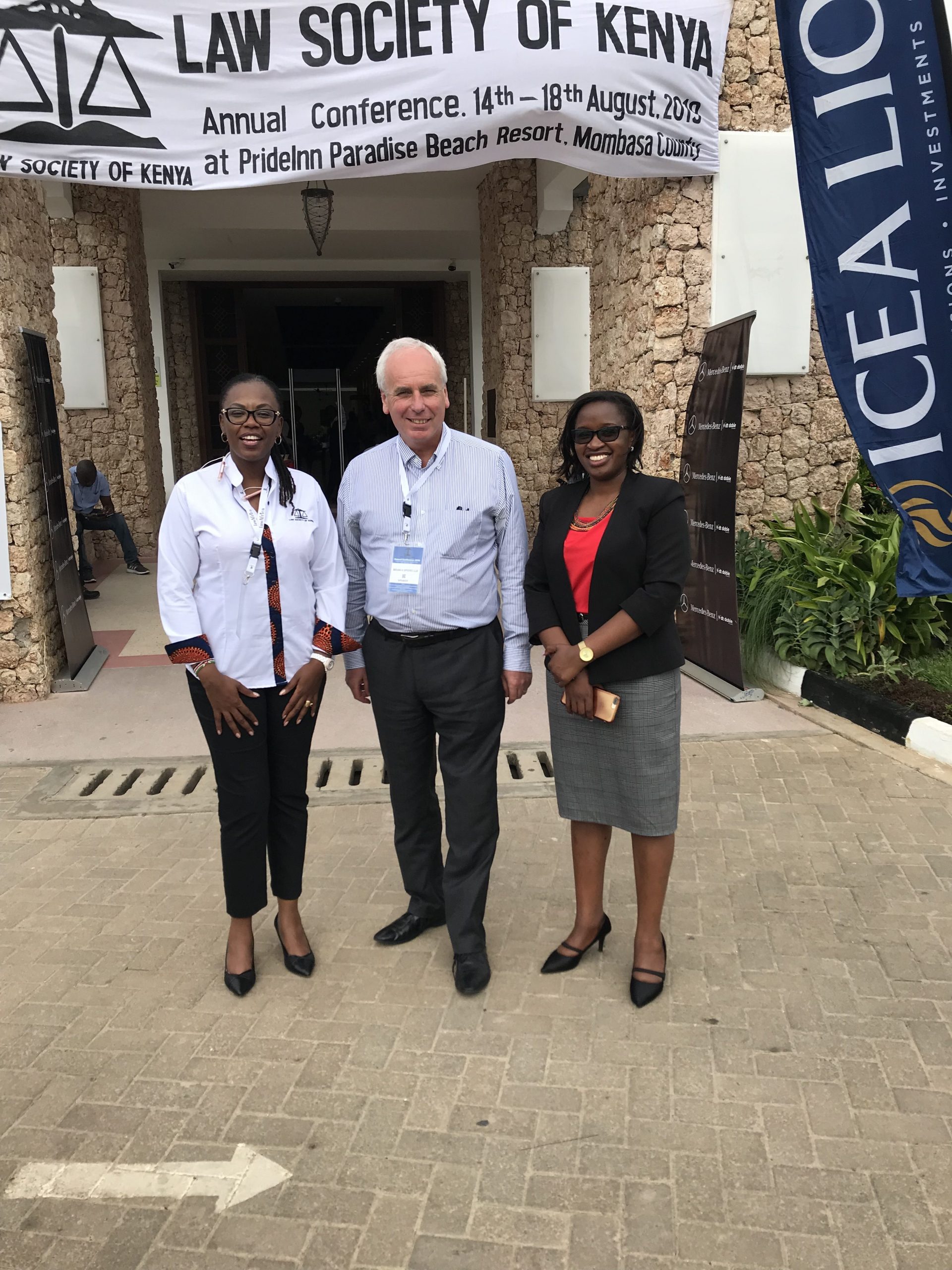 As President of the CLA I had been invited to participate and was designated one of the ‘chief guests’ for the LSK’s Annual Conference. I was introduced to the delegates at the opening reception and in circulating found my welcome warm and genuine and that there was interest in the CLA.

The Law Society of Kenya believes in an early start and there was a good attendance at 7am for a breakfast meeting to consider financial crime and the anti-money laundering requirements. It seemed peculiar that LSK was not yet an official supervisory body under the financial crime legislation. It was also clear that what lawyers from the UK and elsewhere have experienced in recent years regarding anti-money laundering reporting and KYC requirements are only just becoming introduced to the legal fraternity in Kenya.

Some of those who contributed to the breakfast meeting were concerned about the position of confidentiality in communications with clients and the erosion of the lawyer client privilege. Others however simply said that this was a balance between the requirement of lawyers to uphold the law and the need for lawyers to avoid facilitating crime.

Somewhat unexpectedly I was asked to contribute some thoughts which I did and emphasised the balancing nature of the lawyer’s duty to clients and to preserve and uphold confidentiality with the need to recognise that there were some things that trumped those important rights and privileges of the lawyer. Particularly in countries where there were regular complaints about corruption the restriction on the movement of funds and the identification of the source and origin of funds were important.

After the breakfast we moved into the impressive main conference venue of the convention centre at Pride Inn. There were three chief guests including the Governor of Mombasa County (and some newspapers report potential presidential candidate) his Excellency Ali Hassan Joho. He gave a deft and skilful welcome to Mombasa and set the scene for the next chief guest who was the Governor of the Central Bank of Kenya Dr Patrick Njoroge. I spoke to Dr Njoroge in the speakers’ room before we entered the Conference hall and found him to be a restrained, courteous and thoughtful economist which augurs well for the management of the economy of Kenya. It was a pleasure to hear his address to the delegates. In this he emphasised the important role of lawyers in assisting the evolution of the Constitution, in compliance with financial reporting obligations and praised the theme of the Conference which was “An audit of the Constitution and the quest for constitutional reform and transformation”.

I was then invited to bring greetings from the Commonwealth Lawyers Association and to explain some of the work undertaken by the CLA. I had the opportunity to share some thoughts about what a legal community should consider when auditing the Constitution. There was a particularly warm response when I suggested that lawyers in every jurisdiction should stand against tyranny and oppression and the suppression of the rights of civic organisations to hold meetings and to criticise the Executive or those in power.  I suggested that lawyers should stand on the side of the freedom of the individual and the upholding of constitutional rights.

There was also interest in the Child Marriage Report produced by the CLA which I presented to the President of the Law Society of Kenya, Mr Allen Gichuhi.

After these Chief Guest comments we then had an energetic and entertaining contribution from former politician but now academic Professor Githu Muigai (who seemed to have taught most of the delegates in the room). He suggested that while there were issues affecting the Constitution time should be given to allow all its aspects to be implemented and the theme of implantation or reform was one that pervaded other discussions in the conference.

The Conference then split into two streams, one dealing with the technology in legal practice and the other continuing to analyse the Constitution of Kenya. What was striking was the time afforded for delegates to make contributions and the care that speakers took in answering the queries that had been put. Certainly, it was impressive to find so many articulate and thoughtful comments from the floor as well as from the speakers’ platform.

The afternoon continued with consideration of the Constitution and provoked some controversy regarding judicial appointments where the two nominees of the Law Society of Kenya to the Judicial Studies Commission had views which were not exactly aligned. The evening featured a young lawyers party and I was entertained to dinner by lawyers from one of the oldest firms in Mombasa – Daly and Inamdar.

Friday also started early with a woman lawyers breakfast forum before we heard from the Honourable Martha Karua, a highly impressive politician and lawyer who spoke passionately about the need to uphold the Constitution, to implement it fully and of the importance that the Law Society of Kenya took a prominent role in the civic debate. She was followed by the Honourable Justice Patrick Kiage, a Court of Appeal Judge who, along with the Honourable Martha Karua, provided your President with a very significant insight into the legal thinking, the political framework and the dynamism of the legal fraternity within Kenya.

The afternoon again featured a stream considering legal technology for the modern practice and further considerations on the Constitutional audit.

The evening progressed with presentations of thanks to sponsors and to guests and I found myself presenting gifts to sponsors and also invited to lead off the dancing when the Honourable Governor Kingi took the floor with the Honourable Martha Karau and I joined them with the Vice-President of the Law Society of Kenya, Harriette Chiggai. It would not be unfair to suggest that any scouts for Strictly Come Dancing would not have been impressed by my efforts!

The band played loudly, an energetic dance troop provided entertainment and having been assured that the entertainment would continue until perhaps 4am, your President made a dignified exit and prepared for the Saturday morning activity which was a visit to the local orphanage which was being sponsored by the Law Society of Kenya. A separate report on this visit will be provided.

All in all a memorable visit to Mombasa.  I was hugely impressed by the work our East Africa Council member Maria Mbeneka had contributed.  Maria and her Committee organised a magnificent Conference. President Allen was charming, energetic and thoughtful in all he did and said and the CEO Mercy Wambua was simply magnificently impressive.  To all of the Council of the LSK I say thank you for inviting me and congratulations on a splendid Conference.