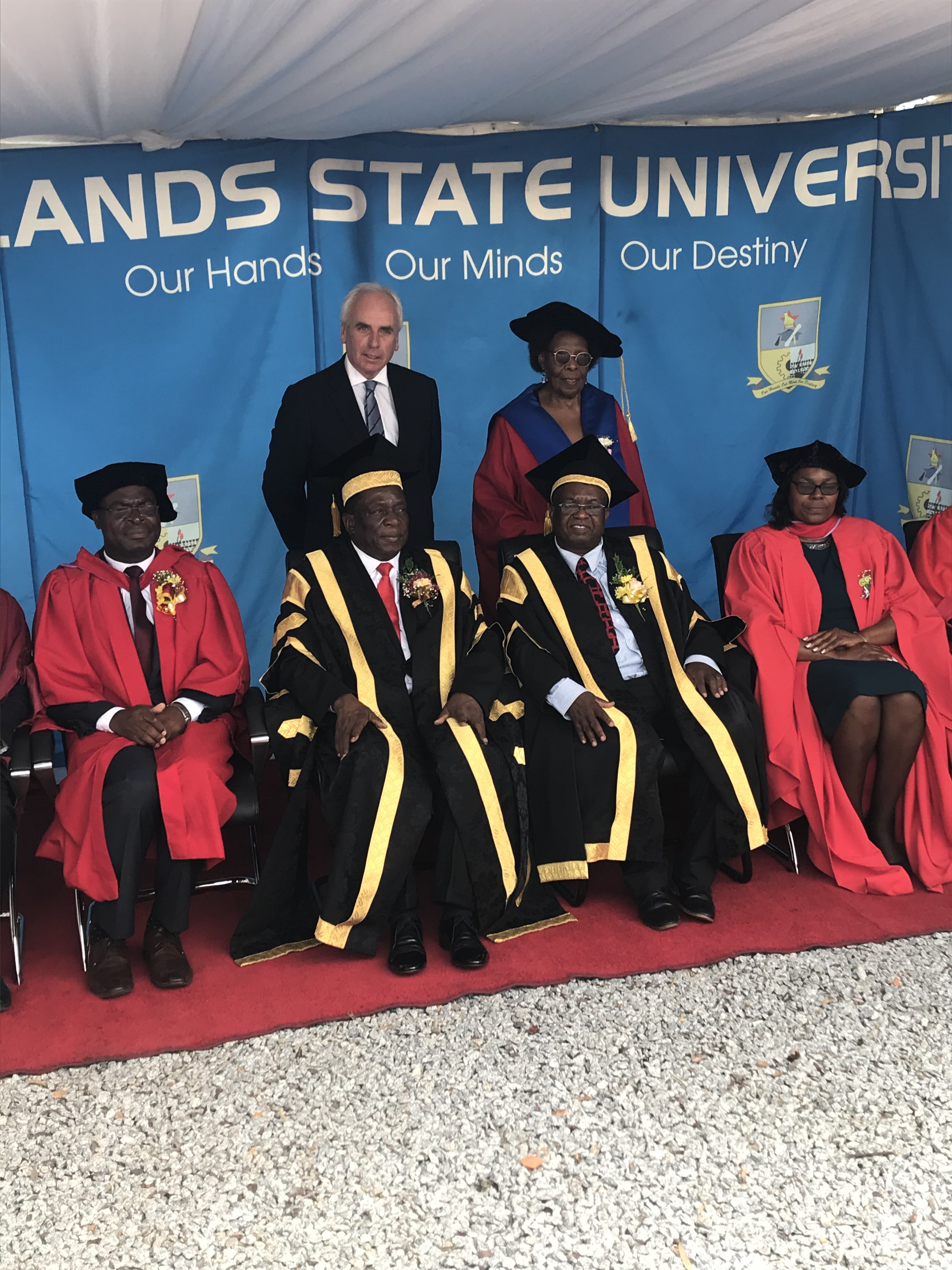 On Friday 22nd November 2019 at the invitation of the co-patrons of the Midlands State University, Gweru, Zimbabwe I attended the autumn graduation ceremony. 3,400 students were graduating and I was interested in attending because one of the co-patrons was Senator Sekai Holland, a keynote speaker at the CLA conference in Livingstone, Zambia in April 2019 with whom I had paid a courtesy visit in August. Of perhaps more interest is that the other co-patron is a certain Emerson Mnangagwa, the President of Zimbabwe. It is not every graduation that a Head of State attends and actively participates. The process of his participation was to ‘cap’ the students who attended and knelt before him. I was therefore interested in both supporting Sekai Holland but in also taking part in a graduation event presided over by the President of Zimbabwe.

The day started early when, from my overnight lodgings, I was transported with the Permanent Secretary of the Department for tertiary education in Zimbabwe. He and I spoke on our 50km journey to the MSU main campus. We discussed student grants, student loans and the regulation of the third level sector.

As he was in an official car we were able to access parking and the university buildings I suspect, much more easily than the several thousand students and their parents who would attend.

I was informed that MSU manage the graduation ceremony in a highly organised way and that was apparent from both my greeting for a breakfast with the Chairman of the Board of Management of the University and with the Vice-Chancellor Professor Muzvidziwa.

We were soon joined by the Deputy Minister for Industrial Affairs and other senior people attending the ceremony paid their respects to the Vice-Chancellor and the Chairman. Around 9am the Vice-Chancellor and Chairman left to robe up to await for the arrival of President Mnangagwa. Sekai Holland arrived and we all enjoyed conversation before she too left to join the main platform party and I was then escorted to the Hall.

I say Hall, but this was an enormous structure packed with 3,400 students and in wings of a more temporary construction erected on either side there were the parents of those graduating and then the musicians and entertainment. The music prompted much dancing in the aisles from the students as I made my way to the seat in a reserved section. From this vantage point I had an excellent view of the security surrounding the stage including army personnel with their rifles and other small firearms, senior military figures in extravagant uniforms and their headgear and impassive dark suited security personnel standing around the stage. As singing gave way to a brass band heralding the arrival of the platform party I knew that this graduation was unlike any that I had attended before.

The platform party were colourful and were resplendent in robes and mortar boards and caps. As they arrived on stage and the President and the Chancellor of the University took his seat between the Chairman and the Vice-Chancellor we all stood and then the National anthem was sung by the renowned Midlands State University choir and musicians.

Then then followed some formality by the Vice-Chancellor giving his report on the activities of the university and inviting the President to declare the graduation open which he duly did. I had wondered how so many students could be accommodated in a graduation event which, while lasting approximately 4 hours, was clearly not long enough to enable each student to appear on stage. Actually, what happened was that the prize winners and first class honours graduates and other notable distinctions were all called on stage by approximately 8 different faculties. Each person graduating and appearing to be formally capped by the Chancellor and President had their name read out. They then knelt before President Mnangagwa who touched their heads with a cap and the student then arose, donned their mortar board and then descended. In fact the whole arrangement worked extremely efficiently dispite the significant numbers of students who took part in this part of the proceedings.

After each faculty the music department presented a song. When I say a song this was vibrant, noisy, rhythmic and accompanied by dancing and whoops. It certainly enlivened the proceedings to an extraordinary degree.

The song followed a formal presentation of degrees by President Mnangagwa and the faculty who had just been capped, so to speak, were invited to stand to be formally declared to have received their degrees. This was at times emotional and exciting as the body of students from that particular faculty all rose and when the President pronounced them as having received their degrees they whooped, yelped and waved their mortar boards in an expression of genuine joy and pride.

The proceedings followed that pattern until it came to the music faculty. A small number of students were involved in receiving their capping from President Mnangagwa but heralding each of those students was an impromptu fanfare from their former colleagues in the music department. When the music department was asked to stand and the President declared them all to have received their degrees, those who graduated then joined their old colleagues from the department to present an astonishing song, music and dancing to the assembly.

I was struck by how well-presented in academic robes, mortar boards and suits and dresses all the graduates were. I was surprised to learn that most of the graduates purchased their robes as a symbol of the pride their families took in them having graduated.

Certainly at the conclusion of the ceremony when the Vice-Chancellor read out and the student body solemnly repeated their commitment to the induction in the alumni association of MSU I found the pride and excitement of the students tangible and moving.

Outside there was a tent in which formal photographs were to be taken. After a photograph of the President and the Vice-Chancellor another seat was added to allow the Chairman and then other members of the senior academic staff to be photographed and then to my surprise I was asked to stand behind the President along with Senator Holland to be photographed. This seemed to be an amazing honour and one which I feel very privileged to have experienced.

There was then some chat with local MPs and the Governor of the Midlands State who was present and then the President made his way into another tent for refreshments along with the Vice-Chancellor, Governor and about 3 or 4 other senior politicians and academic staff.

Once again I was amazed to find myself invited along with Senator Holland into the tent where I was one of only 8 others present in addition to the President’s chief of staff and chief secretary.

The President was sitting on a sofa receiving some food and refreshment. This was brought to myself and I was enjoying coffee and a biscuit whenever I heard the words ‘would Mr Speers like to join me?’ At that I arose and sat on a relatively small sofa closely adjacent to President Mnangagwa himself. He asked me what I had thought of the ceremony and I shared my views about it being both well organised, exciting, thrilling and moving and clearly a great source of pride to the students and I thought how pleased they must have been that the President himself took the time to cap the students. He asked me what was my connection and I explained through Senator Holland, his co-patron, I had expressed an interest in supporting her Zimbabwe peacebuilding initiative and to provide some capacity building particularly in the area of mediation training. I explained that I had attended the Commonwealth Law Ministers meeting in Colombo and the Commonwealth Parliamentarians meeting in Uganda.

He asked what part I had played in the parliamentarians meeting and I shared with him that I had brought information about the Latimer House Principles of Government. He shared some thoughts on judicial appointment and corruption among the judiciary and I said that I had found his comments interesting and that the CLA was very much in favour of an independent judiciary, an independent legal profession and generally in upholding the Rule of Law. He asked about our conference in Zambia and I explained that I in Zambia had met President Lungu who had opened the conference. At this President Mnangagwa said ‘another lawyer’.

I asked if he minded if a photograph was taken on my phone to supplement the official photographs that had been taken and he called his staff member who took a photograph and I then again said that I hoped to support the programme at MSU on mediation and he rather interestingly said that he too would wish to support that initiative.

All in all with the music, the dancing, the numbers of people in attendance, the heat, the security, the meeting with the President – and much more – I found the whole experience both exhilarating, exhausting and certainly memorable. Indeed a graduation like no other.