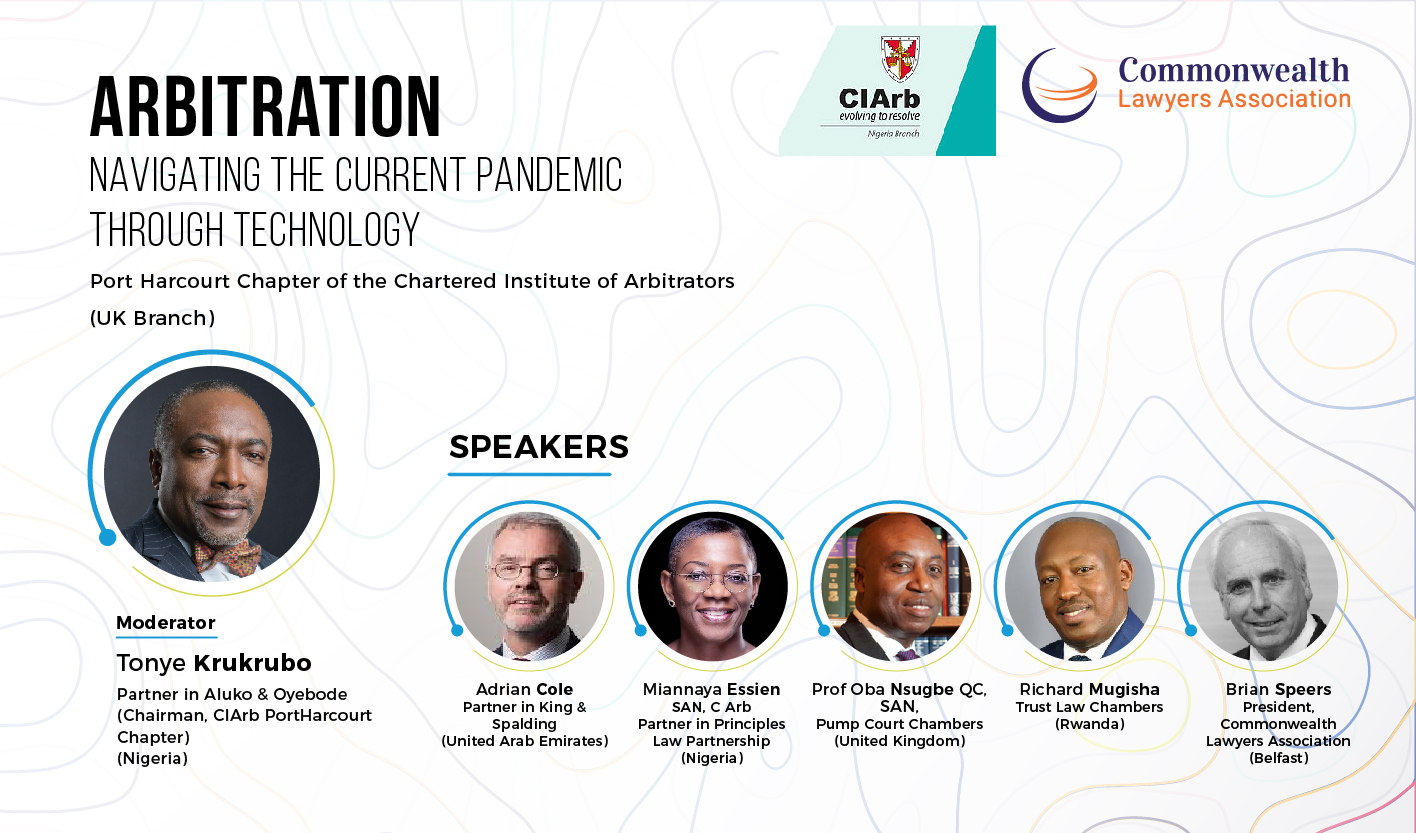 On 12 June 2020 a collaboration event took place between the Port Harcourt Chapter of the Chartered Institute of Arbitrators and the Commonwealth Lawyers’ Association.  In an initiative brought about through the helpful assistance of Miannaya Essien, the CLA Council member for Nigeria, the webinar was facilitated and hosted by Mr Tonye Krukrubo the Chair of the Port Harcourt branch Nigeria of the Chartered Institute of Arbitrators.  There was a distinguished panel including Adrian Cole, a partner in King & Spalding, our own Miannaya Essien, Professor Oba Nsugbe QC, SAN, the CLA’s Council member Richard Mugisha and myself.

The technology facilitated by Tonye Krukrubo was impressive with the panel in their own room assembled for a pre-webinar discussion and a number of legal colleagues from a wide variety of jurisdictions listening in.  The jurisdictions involved included the UK, Nigeria, India as well as Uganda and Ghana.

While dealing with the subject of arbitration and noting that in the current situation where courts were not functioning as normal and that arbitration therefore was a very viable alternative there were also concerns expressed about how arbitration had become too much like court.  Mr Adrian Cole, in a practical and impactful talk referenced how the old normal involved parties travelling to a venue, being put up in hotels and attending the arbitration, and that contributed to expense and delay.  The new situation allowed people to participate online in an arbitration and with filing of documents and arbitration not being required to be conducted in public unlike the courts he foresaw a great commercial benefit to online mediation in the post-COVID world.

Richard Mugisha echoed that view and thought that with the pandemic and its impact on the courts which would take a long time to catch up on an already overloaded court list, that arbitration was a viable alternative.  I observed that arbitration most certainly had its place to play, particularly in circumstances where concerns were expressed that courts functioning online did not address the need to ensure that the public had access and that court justice was dispensed openly.  I also referenced how mediation could play a part and indicated that the Singapore convention would do for mediation agreements what the New York convention on arbitration enforcement had done for arbitrations.  Miannaya Essien expressed some concerns about cost and delay and how arbitration really was becoming a dispute resolution mechanism for high value commercial disputes and that many so called ordinary disputes were still not being well served by arbitration, and in an impressive finale Professor Oba Nsugbe QC, SAN expressed more optimism about the value of arbitration, about how arbitrations could be conducted online and noted that where parties could both make submissions, file documents and potentially agree to have disputes resolved on the papers there was every opportunity for a flexible arbitration process to meet business dispute needs.

Some questions were received from Tonye having been submitted by those attending online.

Overall this was an excellent initiative by our Nigerian Council member, Miannaya Essien, to whom thanks and gratitude are expressed and also it was excellent to collaborate with the Chartered Institute of Arbitrators Port Harcourt Nigeria branch.  The opportunity to take part provided an opportunity also for the CLA to be mentioned to those listening and for the CLA conference in September 2021 to be mentioned in the hope that many from the jurisdiction of Nigeria would be interested to attend.

Statement / Statement on the Judiciary in Hong Kong

CLA News / The role of the Commonwealth in protecting...