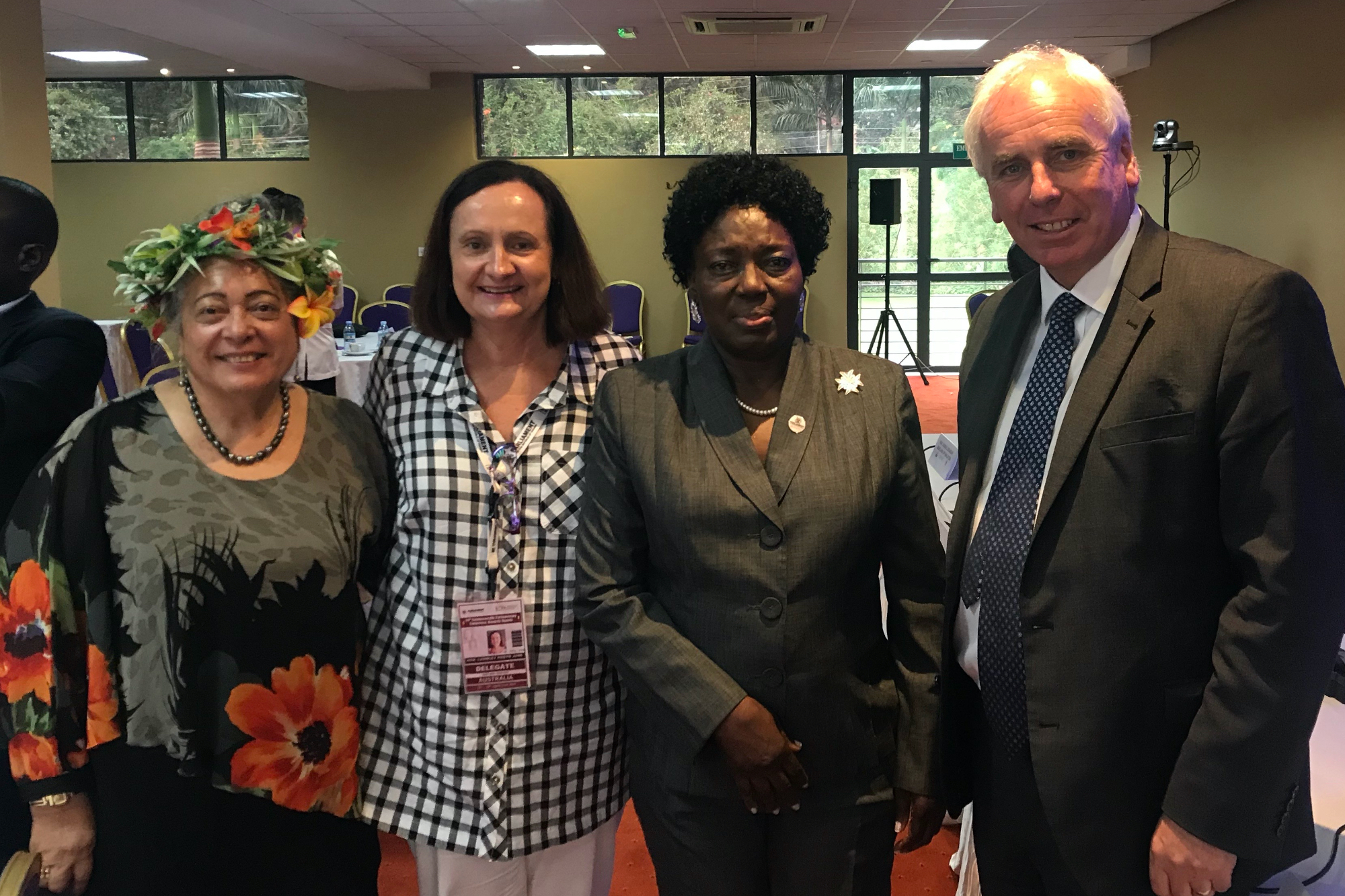 The CLA were invited to take part in a session on Friday 27th September identifying the role of Parliament in connection with the doctrine of the separation of powers. I offered to attend and took the sensible and necessary precaution of being fully briefed by Peter Slinn, Colin Nicholls and John Almeida in relation to the evolution of the Latimer House Principles and the Latimer House Toolkit and the assessment of the Supreme Court decision in relation to the UK Parliament prorogation by Prime Minister Johnston.

One of the most useful source documents I considered was an article by Peter Slinn and Dr Karen Brewer of the Commonwealth Magistrate and Judges Association.  I commend this article to any who want an accurate and insightful historical perspective on the evolution of the Commonwealth principles on government which developed into the Latimer House Principles and were then considered in the Nairobi Declaration and with some frustration at the Edinburgh Declaration and then resulted in the creation of the Latimer House Toolkit which was published in 2018.

Having been expertly informed by these three consultees and then embarking on a process of reading and note making particularly on the flights to Entebbe I arrived in the conference venue – The Speke Resort Munyonyo, Kampala – at 3a.m. on Friday 27th September having travelled for 22 hours from Belfast.

It would be an exaggeration to say that I slept fitfully and well. However, I did arise and then prepared some further notes before meeting with the CPA Director of Programmes, Mr Matthew Salik. He confirmed that the panel would each be offered the opportunity to present for 10 minutes. There would then be questions from the floor, a break and then work groups would discuss matters and issue comments before the recommendations were disclosed and adopted by the meeting.

The panel was diverse and expert. It was chaired by Hon. Christine St-Pierre MNA, Quebec. A former journalist, Christine chaired the session tightly and well while permitting extensive comment from the floor. The first to speak was Hon. Shri Rajendra Trevedi MLA Gujarat. He referenced Montesquieu and Ghandi in his comments and noted in Indian culture the separation of power predated Montesquieu.  He acknowledged the importance of the separation of powers between the Executive, Parliament and the Judiciary. Following him was Hon. John Mbadi EGH MP, Kenya. An accountant by profession he was interested in the financial probity and scrutiny of any Executive activity. There was an emphasis on balance between the entitlement of the Executive to govern and make decisions and the need to be scrutinised and held to account.

Perhaps the most impactful presentation was from Hon. Datuk Shamsul Iskandar Mohd Akin MP of Malaysia who with a series of well-chosen PowerPoint illustrations took us from the importance of the primacy of Parliament and provided a rationale for this.

This set the scene for me to present my thoughts in relation to the topic of parliamentary sovereignty in connection with the separation of powers.

I explained that in the company of legislators and elected representatives I felt something of an interloper. However, I was impressed by the attention of the very full seminar room to the contributions of the three previous speakers and was unsurprised given that the topic of the separation of powers and the sovereignty of parliament was of such critical importance. I said that while it was of critical importance it was not new and that a historical perspective was necessary.

I then reminded the delegates of the Harare Declaration of Commonwealth Principles leading to the Latimer House colloquium resulting in Latimer House Principles adopted in Abuja, Nigeria in 2003. I then said in an effort to kick-start matters there had been the meeting in Nairobi resulting in the Nairobi Plan of Action for Africa which I suggested was somewhat misnamed given that “action” had not been evident.

The fact that it was not evident was plain in the wording and vocabulary of the so-called Edinburgh Declaration of 2008 which very pithily suggested what steps needed to be taken with regard to the independence of Parliament, the accountability of the Executive, the independence of the Judiciary and freedom of expression in the press.

I referred the delegates to the excellent article by Peter Slinn and Dr Karen Brewer and quoted from it to the effect that the Edinburgh Principles had identified that elected representatives were a changing population and each successive generation of parliamentarians needed to receive appropriate training. I concluded this section by saying that CLA stood ready, willing and able to provide training using the Latimer House Toolkit.

I observed that it needed to be set in context: that the judgement arose because of initiatives taken by essentially by pro remain actors. Some saw it in the context of the Remain or Leave vote.  The Court was eager to emphasise that this judgement was not about Brexit. It was about constitutional legal issues. I observed that the Court itself recognised the case was a one off.

Noting that the Government had not actually provided any information about why they considered a lengthy prorogation of the term they had sought was necessary, the conclusion of the Supreme Court that the prorogation was destined to thwart or as the Scottish Court said, stymie, Parliamentary scrutiny was, I suggested,  understandable.

In a follow up question from a constitutional law professor and now Senator, Mark Gold of the Canadian province of Quebec, I elaborated that in any legal case there might be a range of legal opinion.  In this case Scotland found the prorogation issue justiciable.  A very powerful Court in England including the Lord Chief Justice, Lord Burnett, found that it was not justiciable however 11 Supreme Court judges found it was and ruled the way they had.

At the conclusion of my remarks the floor was then opened to questions. These were lively but often not so much questions as observations and submissions.

It was quite clear that the topic had enlivened delegates. There were questions about small jurisdictions and what they could do to improve their constitutionalism and to support the role of parliament. There were questions about corruption and how that could be monitored and there were some memorable observations made by a public representative from Zambia who said regarding corruption that ultimately God would be the final auditor and regarding the Executive, seeking to remain in power that those in power exercised power to retain power.

An opposition Senator from Trinidad and Tobago, Senator Wade Mark asked about what smaller jurisdictions could do to ensure compliance with the separation of powers. In discussion afterwards with him and with others in a round table discussion involving the smaller parliamentary jurisdictions I found myself sitting beside the Honourable Dr Rebecca Kadaga, speaker of the parliament of Uganda. Also at the table were the new Commonwealth Parliamentary Association Chair of Small Jurisdictions and Speaker of the Parliament of the Cook Islands, Hon Niki Rattle. The opposition member from Trinidad and Tobago, Senator Mark was present at our table as was the Honourable Robyn Lambley MLA, an independent member of the Legislative Assembly of the Northern Territories, Australia.

I suggested that smaller jurisdictions needed to ensure that there was a properly funded public accounts committee and proper scrutinising parliamentary committees. I was somewhat surprised that in some of the Caribbean jurisdictions where in effect the parliament comprised a very small number (as low in some cases as 9 members) and the governing party was in effect 100% of the Executive that really the parliament was largely redundant and window dressing. In those circumstances I referenced the existence of the Commonwealth Ministerial Action Group which could provide an independent audit on compliance with the Latimer House Principles and I also made reference to the political arrangements in Northern Ireland where to accommodate differences in the community special arrangements had been made to ensure that ministerial positions were occupied as a matter of law by opposition members and other parties proportionate to their vote. Their proportional representation system in Northern Ireland was of interest to delegates at the discussion table.

Following discussion each table then provided a rapporteur to summarise their findings. The meeting then concluded with an endorsement of various recommendations and the CLA recommendation was endorsed at this meeting and reads as follows:

The Commonwealth Lawyers Association supports the promotion of and training in the Latimer House Principles and notes:

A.  the continuing need for implementation and compliance by Governments*and

B. the need to ensure Peer review mechanism by CMAG is appropriate and effective.

* (particularly to ensure that legislatures have robust independent accountability mechanisms (e.g. through select committees) by which Ministers are held to account)

After the meeting I engaged in useful conversation with the Honourable Mark Gold, the constitutional law professor, and now Senator in Quebec. Given his interest in mediation we immediately hit it off on a number of shared interests and I am sure that we will remain in contact and that Senator Gold will be an interesting contributor at future Commonwealth Law Conferences.

I also spoke to the speaker of the House of Parliament of the Republic of Trinidad and Tobago, the Honourable Bridgid Mary Annisette-George MP.

The fact that she knew Mr Justice Vasheist Kokaram made for an instant connection and once again the interest of small communities in the topic of the independence of Parliament made for interesting discussion. Tangible outcomes were that the Honourable Robyn Lambley of the Northern Territories in Australia was extremely keen to obtain more information regarding the Latimer House principles and Senator Wade Mark, the leader of the opposition in the parliament in Trinidad and Tobago asked that I send to him a summary of my remarks so that he could bring into his activities reference to the fact that building on the Harare Declaration and leading to the Nairobi Action Plan and the Edinburgh Declaration there was plenty of scope to ensure that Parliament was independent and sovereign.  I suspect there may be an opportunity for the CLA to provide training on the Latimer House Principles from a number of jurisdictions including Trinidad and Tobago.

I was gratified that the CLA were invited to participate in the Commonwealth Parliamentary Association Conference. This session underlined the important overlap of lawyers opinion with parliamentarians views. The conference had been opened in dramatic style by President Museveni of Uganda. Given the high profile in public life of the delegates the security at the venue was immense and police, military and all manner of security requirements were very much in force throughout my participation in this event. I am writing separately about the opportunity I took while in Uganda to foster relations with the Uganda Law Society.