After visiting Fiji and meeting with the Law Society of Fiji and the South Pacific Lawyers Association, and then visiting Canberra for meetings with the Law Council of Australia, I made my way to Kota Kinabalu, North Borneo. I confess to not having heard of Kota Kinabalu before.  KK, as it is known, is the capital of Sabah and one of the three jurisdictions that make up Malaysia, the others being Western Malaysia or Peninsula Malaysia and Sarawak.  It is fair to say that when one mentions Malaysia, one thinks of Kuala Lumpur. However my visit to Kota Kinabalu has changed my perception in that regard.  Aside from its stunning northern Borneo natural beauty and the friendliness of the Sabahan people we met, they clearly possess a dynamic and outward looking Law Society.

We were taken for dinner to one of their famous fish restaurants – the Welcome Fish Restaurant – by the energetic President of the Sabah Law Society, Roger Chin who brought along one of his committee members and his treasurer. 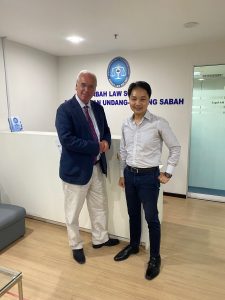 After being oriented as to the relationship between Sabah and the other Malaysia jurisdictions, the conversation turned to how Sabah was keen to develop international engagement and their connection to the CLA.

Roger arranged a more formal meeting at the offices of Sabah Law Society.  There I met with seven members of their Law Council, including their Vice President.  I took the opportunity of explaining the work of the CLA and how the CLA was an accredited organisation of the Commonwealth Secretariat.  I explained our projects and new Committees, including the Environmental Committee.  I also mentioned the ADR committee and the work that the CLA had undertaken regarding the Latimer House principles and the role of media and freedom of expression.

A specific matter discussed was the possibility of the CLA partnering with Sabah Law Society in holding a Borneo Rainforest Conference.  This would combine a focus on environmental law and the role of lawyers in climate justice.  I suggested that the CLA might be able to deliver some international speakers which the Sabah Law Society acknowledged had presented a challenge to them in their inaugural Borneo Rainforest conference.  President Rodger took me to the International Convention Centre in Kota Kinabalu and indicated that he anticipated the Ministry of Tourism may provide support for conference delegates to attend such an event.

The prospect of a midterm conference in Sabah between the Goa conference and the next CLC seems enticing, and I shall be bringing a full report of those discussions and the possibility of a collaboration with the Sabah Law Society to the next meeting of the CLA Executive Committee.  It does occur to me also that LAWASIA might be involved in another collaboration such as we enjoyed in the Fiji ADR conference, where the CLA, LAWASIA, the Fiji Law Society and the South Pacific Lawyers Association all combined to deliver a most effective conference.

Having been unaware of Kota Kinabalu before my arrival, I can say that it is a marvellous place to visit with many things of interest to see and do including water sports and snorkelling, rainforest and animals and local hand craft and spice markets.

I look forward to advancing our discussions for a Borneo Rainforest Conference.