I was pleased to attend an ADR conference in Denaru, Fiji on 9th and 10th September 2022.  This event was a unique collaboration between the Commonwealth Lawyers Association, LAWASIA, the South Pacific Lawyers Association (SPLA), the International Law Section of the Law Council of Australia and Fiji Law Society.

Held in the attractive setting of the Sofitel Fiji Resort in Denaru,  I arrived after a mere 40 hours of travel from Belfast and found myself warmly welcomed to Fiji by the organisers of this Conference.  On Friday morning, a meeting was held to discuss areas of mutual interest between the Law Council of Australia, SPLA and LAWASIA.  Among the matters considered was the importance of freedom of expression.  I was able to reference the recent Report on the role of media in good governance produced jointly by the CLA and others, including the Commonwealth Magistrates and Judges Association and Commonwealth Journalists Association.  I also referenced the Latimer House Principles and how important these principles were in establishing the independence of the legal profession and the judiciary.  One matter which seemed to be of interest to the Law Society of Fiji and the South Pacific Lawyers was of course the theme of the conference – namely Mediation and Arbitration. 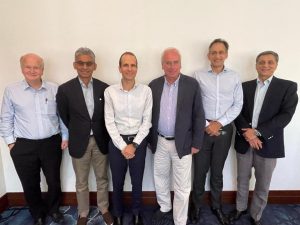 I shall report separately on a meeting held with Mr Richard Naidu a prominent lawyer in Fiji presently being prosecuted for alleged contempt of Court.

During the afternoon of Friday 9th September, an ADR workshop was arranged which included an introduction to arbitration from Joe Tirado, Head of ADR at Garrigues UK LLP, and a mediation demonstration.  The Conference proper started with a magnificent open-air reception.  The former Chief Justice of Fiji, Anthony Gates, gave some words of welcome and then joined the international delegates for dinner at a waterfront location.  It was excellent to mingle with colleagues and in particular the Council Members of the Law Society of Fiji.  It was particularly good to speak with Wylie Clark,e the much respected and energetic President of the Law Society of Fiji. 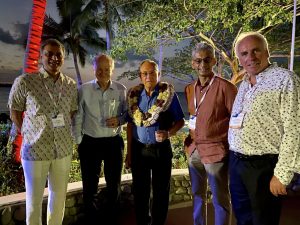 On Saturday 10th September ,the conference began with an Opening ceremony which included welcomes from Wylie Clarke on behalf of the Law Society of Fiji, Shyam Divan President Elect of LAWASIA (and husband of Madhavi Divan, Co-Chair of the Papers Committee for the Goa Conference) , Gordon Hughes Chair of SPLA, Tass Liveris President of the Law Council of Australia and me on behalf of the CLA.  Mary Wilson, a principal sponsor of the Conference, also brought her words of welcome.

There was then an opening Keynote by way of recorded message from Judge Tom Bathurst, a former Chief Justice of the Supreme Court of New South Wales.  The first session considered the Singapore Mediation Convention.  I was pleased to be part of a panel featuring Mary Walker, a prominent mediator in Australia and Chair of the International Section of the Law Council of Australia.  Also on the panel was Tat Lim from Singapore, who had hosted me on a previous trip discussing mediation at the Law Society of Singapore.  I left the detail of the convention to Mary and Tat and took as my theme how a United Nations Convention heralded a step change in respect for mediation.  I suggested that one of the biggest challenges was not that mediation was still striving for recognition as an important dispute resolution option, but rather that there remained in too many jurisdictions a resistant legal profession. 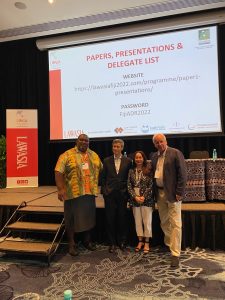 The sessions continued with a session on” Online Dispute Resolution – Lessons from the Pandemic”.  Tass Liveris, President of the Law Council of Australia spoke, as did Steven Thiru, CLA Vice President for Australasia, who spoke about the online transformation of the judicial process in Malaysia. Steven, with his customary panache and energy, portrayed a truly transformed judicial system in Malaysia.  It was really heartening to hear from Steven how the judiciary in Malaysia have adapted so promptly and significantly to the use of online technology. 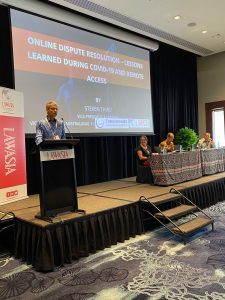 The position in Fiji was a lot less encouraging unfortunately.  Trial delays were significant and there were delays in receiving Judgements.

Other conference sessions included one on ADR and the Environment, and it was interesting to hear what Mary Wilson had to say on this topic.  Richard Naidu of Fiji chaired a session on emerging mechanisms for disputes prevention.

In a session considering the integration of ADR into courts and tribunals, Wylie Clarke spoke most effectively on the absence of such integration in Fiji, and how creating greater capacity for ADR in Fiji would assist. He spoke about the frustration of bringing cases to Court and then experiencing delays, sometimes of five to six years, before a Judgement was provided.

This Conference was important in many ways, not least of which was the opportunity to showcase the Law Society of Fiji and to interact with many of their council members.  There are clearly rule of law issues in Fiji and I feel it was important that the Commonwealth Lawyers Association were there in person to be able to provide solidarity and encouragement to our colleagues in Fiji.  To that, end my presence and that of Vice President Stephen Thiru was greatly appreciated by the Law Society of Fiji.  However, what was also important, was the connection made to the South Pacific Lawyers Association and LAWASIA and the Law Council of Australia.

Although taking 40 hours to get there, I was greatly impressed with the quality of speakers at the ADR conference and with the opportunity to connect very closely with sister organisations.

Congratulations are due to all who organised such a superb event.