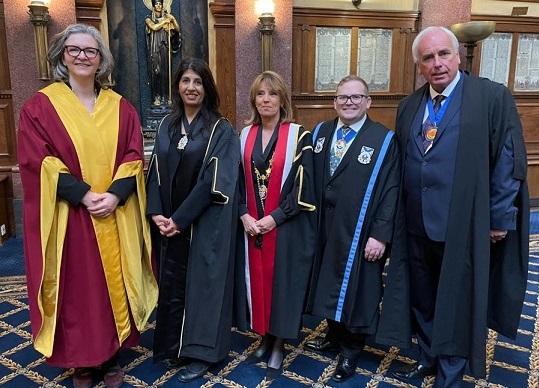 I was privileged to be one of those international guests when on Sunday 2nd October, I attended at the Law Society premises Chancery Lane, London.

The opening panel considered legal professional ethics and was jointly chaired by Stephanie Boyce, the President of the Law Society of England and Wales, and by Mark Fenhalls KC, the Chairman of the Bar Council of England and Wales.  An impressive panel comprised Julie Couturier, President of the Paris Bar, Sternford Moyo, the President of the International Bar Association, and Karen Cheah Yee Lynn, President of the Malaysia Bar Council.  These contributions were thought provoking and stimulating and included expressing concern about tactics used by lawyers to delay proceedings in breach of their overriding duty as Officers of the Court.  Concerns were also expressed about Lawyers being associated with their clients.

I was able to make my own contributions from the floor commending the judgement of the Chief Justice of Malaysia in upholding the conviction and imprisonment of the former Prime Minister.  I also noted the importance of Freedom of Expression and how lawyers must be available to represent parties and that the independence of the judiciary, and their appointment, were vital.

After this exceptional round table, we all retired to prepare for an evening of receptions.  One was held by the American Bar Association and from that reception we moved to Temple Church for a reception and a discourse on the remarkable history of Temple Church.  Thus fortified, we repaired to Middle Temple for a dinner for all the international guests.  The setting was impressive, Middle Temple Hall being an Elizabethan Hall begun in 1562.  I had been afforded the enormous honour and privilege of speaking at this impressive dinner on behalf of the internationals guests, to offer thanks to the Law Society and Bar Council.

I took the opportunity of noting with sadness the passing of Queen Elizabeth II who had for so many years been the Head of the Commonwealth and who had served in that capacity with dignity and steadfastness.  I also emphasised how lawyers were vital in the fight against corruption and had a part to play in ensuring that climate justice targets were met.  I expressed the view that lawyers would be involved in bringing to justice those who had committed war crimes, particularly in the context of the Russian aggression in the Ukraine.

The dinner ended with the opportunity to mingle again with international guests.  It was a simply splendid occasion.

The following morning, we again assembled at the Law Society in Chancery Lane for a photograph to mark the international guests meeting, and we then travelled by coach to Westminster Abbey.  We arrived in plenty of time to enjoy the Abbey, watching the arrival of KCs and judges, and the different court regalia that international guests were wearing as part of the colour and pageant for the service.  The service received readings from the newly appointed Lord Chancellor, and from the Lord Chief Justice of England and Wales, and was the first occasion in which I was able to sing the national anthem, this time using the words “God Save the King”.

We then paraded the short distance into Westminster Hall where there was plenty of opportunity to meet friends of the CLA. I lost no time in mentioning our CLC in Goa in March 2023 and the Lord Chief Justice of England and Wales, Lord Burnett, spoke to me about the Goa conference and looked forward to attending – as did his Honour Judge Alan Large the Judge Advocate General of the courts dealing with military matters in the UK ,who was such a prominent contributor to the last CLC in the Bahamas.  Lord Justice Dingemans, a great friend of the CLA, introduced me to Chief Justice Olukayode Ariwoola of Nigeria and to Judge Nadungu, a Justice of the Supreme Court of Kenya.

It was marvellous to chat to Lord Carnwath, retired Judge of the Supreme Court of the UK, who will be a speaker in Goa and also to connect with our friends from the Faculty of Advocates in Scotland and from the Senior Judiciary, Lord Carloway and Lady Dorrian, who also looked forward to attending in Goa.

My thanks are due to the Bar Council and Law Society of England and Wales for the generous hospitality throughout the Opening of the Legal Year weekend and for the opportunity this weekend provided to connect to so many Bar leaders, many in the Commonwealth jurisdictions.