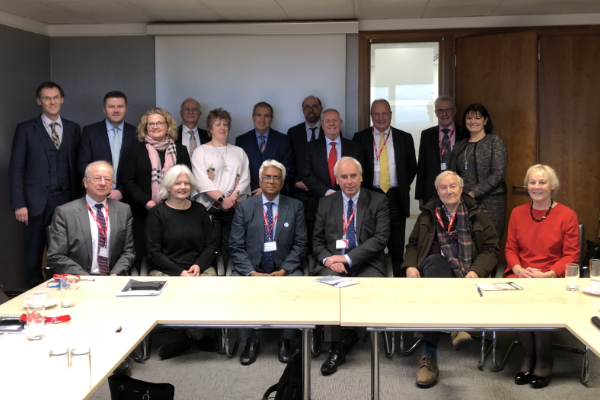 The President of the CLA Mr Santhaan Krishnan gave an opening welcome providing delegates with some of the history of the CLA, how it evolved and where the CLA as an organisation sat within the accredited organisations of the Commonwealth.

The Chair of the European Hub Mr Brian Speers then presented the information slides relating to the CLA to provide some additional background for delegates with particular emphasis on the new website and the interactive arrangements within the website to enable member societies and individuals to exchange ideas, post, news, views and articles.
Following these introductory remarks and the introduction of the delegates to each other, Ms Lorna Jack, the Chief Executive of the Law Society of Scotland, provided information as to the position of regulation of the solicitors’ profession in Scotland. In particular she highlighted the recent publication of the Roberton Report. This had stimulated great concern in the legal fraternity as it suggested that the head of a proposed new regulatory body for both the solicitors and the bar should not be the Chief Justice of Scotland but should be appointed by the Scottish government.
This seemed to run counter to established principles of independence of the legal profession and the Law Society of Scotland had made robust representations to the law officers of the Scottish government concerning this matter.

After this insight report from Lorna Jack, delegates discussed the matter generally expressing concern that the Rule of Law and the separation of the legal profession and the judiciary from the legislature and the executive needed to be upheld, was in fact a core goal, aim and function of the CLA and the CLA formally offered support to the Law Society of Scotland at a time when it was considered helpful to the Law Society of Scotland.

The Law Society of England and Wales, having experienced the separation of regulation from representation through the SRA noted that the SRA was still under the umbrella (in terms of accountability and reporting) of the Law Society of England and Wales and the Scottish proposals were a marked difference to their present arrangements. Other Law Society representatives noted that they remained the regulator of the legal profession as well as having a representative role and noted with great interest the position in Scotland and also the arguments that could be made as were advised by the Law Society of Northern Ireland in the context of a review of legal services in that jurisdiction. All concerned considered this to be a topic of vital importance and worthy of consideration in more depth at a future CLA hub meeting. The views of other jurisdictions in other hubs should be taken into account.
The meeting continued with a presentation by Dr Frank Geddis of the Law Society of Northern Ireland into Brexit related implications for the freedom to provide legal services outside the United Kingdom after Brexit. This is clearly a complicated matter involving both the provision of services where legal services formed only part of the services in total provided by the United Kingdom and the freedom of movement. Discussion after Dr Geddis’ helpful presentation included contributions from Christian Wisskirchen of the Bar Council of England and Wales and by the Law Society of England and Wales through Paul Wilson.

Interestingly the jurisdictions of Guernsey, Jersey and the Isle of Man are not particularly affected directly by Brexit related provision of services complications and this conversation then developed into a consideration of whether a more general recognition of legal qualification from common law jurisdictions could be established which might facilitate within the Commonwealth a greater ease of movement and the provision of legal services. It was noted that access to Australia had been liberated recently and some time was spent considering the position of access in India where the President of the CLA Mr Krishnan was able to say that matters were slowly improving as India recognised the advantage of some movement into its jurisdiction from lawyers. This discussion concluded with an aspiration that a common law qualification in law might be contemplated (as the conversation continued outside of the meeting an interesting proposal was mooted by the Chief Executive of the Law Society of Jersey to the effect that a Commonwealth Code of Conduct for lawyers might be a project worth considering).

After a lunch break generous provided by our host law firm, the Chair of the European Hub Mr Brian Speers shared his experiences of CLC conferences and his particular interest in mediation. He provided delegates with information about training he had given at the request of the Law Society of Namibia and how he had attended and presented at mediation events in several jurisdictions and at several Commonwealth Law Conferences. Mr Speers advised that he gave this as an illustration of how jurisdictions such as Northern Ireland had been able to voice their interests and expertise in particular subjects at a more international level and how he personally had benefited from membership of an involvement in the CLA.

There was a discussion more widely about other areas which the CLA could explore and how members of the jurisdictions attending the inaugural hub meeting could encourage membership in their jurisdiction and encourage a sharing of best practice and expertise in a whole range of matters from rule of law and human rights issues to environmental legal documents, cybercrime and other constitutional matters.

At this stage one of the honorary life Presidents of the CLA, Mr Colin Nicholls QC, attended and provided a most welcome insight into the position of the CLA within the accredited organisations of the Commonwealth secretariat and how he had attended meetings of the Law Ministers which were held biannually. He said this gave the CLA a valuable opportunity of speaking directly to law ministers on topics of interest and relevance and reporting on the activities of the CLA.

Brian Speers had advised earlier of some areas of activity for the CLA including the Latimer House principles and Mr Nicholl’s elaborated on those.
Mr Speers also drew the attention of the delegates to the Girls not Brides project and confirmed that a detailed report analysing the position of legislation and law in all of the Commonwealth jurisdictions regarding child marriage would be presented to the Secretary General of the Commonwealth at the CLC in Livingstone, Zambia in April. This was a major piece of work and when taken together with work on the freedom of expression project and the interventions in several Guantanamo Bay cases Mr Speers concluded that while there was much to be done, much satisfaction was to be derived from membership of the CLA and the opportunity it gave to share experiences in best practice from jurisdictions.