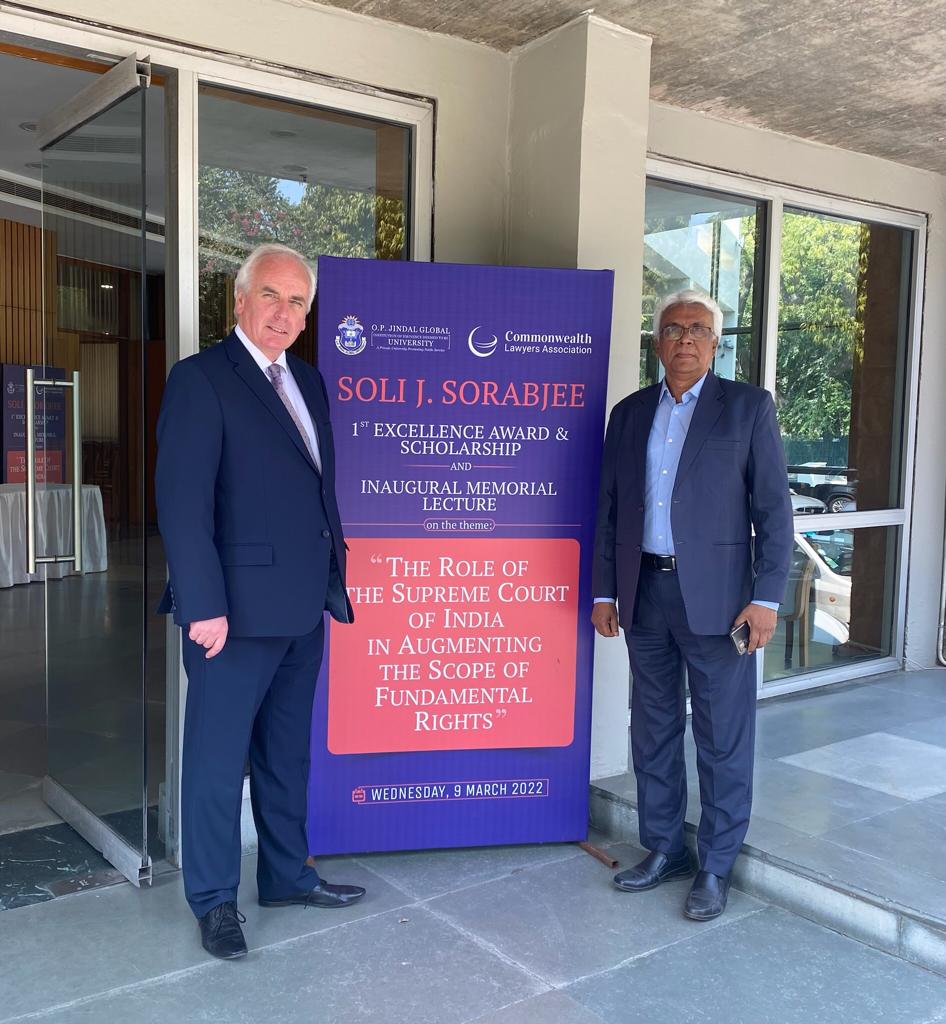 This short report describes the events of Wednesday afternoon 9th March 2022. The occasion was the inaugural Soli Sorabjee Memorial Lecture. The venue was where Soli in effect created his second home –  the India International Centre. Before the Lecture, I was privileged to attend a lunch at the IIC with Soli’s widow ,Mrs Zena Sorabjee, and two of her children, sons Hormazd and Jehangir. The date of the lecture was Soli’s birthday, and many fond recollections of him were shared. Following the lunch, I viewed the preparations in the lecture hall and was impressed by the dressing of the stage in CLA colours and showing the logos of the joint organisers of the event, being the CLA and the O.P Jindal Global University. 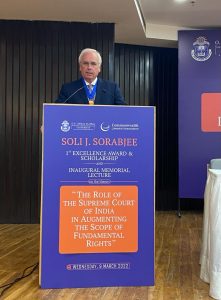 I was part of the platform party to bring a word of greeting from the CLA, and I took the opportunity of noting the impact which Soli Sorabjee had made on the CLA throughout his long period of involvement. I recalled how 12 past CLA presidents took part in a webinar bringing their recollections of Soli, by way of tribute to him, shortly after his passing.

The lecture itself was delivered by a Justice of the Supreme Court Mr Justice L. Nageswara Rao. His Honour Judge Rao had previously participated in an event in Singapore, where he and I spoke about mediation to the Law Society of Singapore. It was great to be connected to him once again. His lecture was far reaching and important.

The theme was “The role of the Supreme Court of India in augmenting the scope of fundamental rights”.

Justice Rao said “In this country, the Constitution is suprema lex, it is the paramount law of the land. In the words of Soli, rule of law runs like a golden thread in the Indian constitution. The vision and goals of the Constitution are set out in the Preamble and these goals are to be carried out through the fundamental rights and directive principles of state policy. Article 14, Article 19 and Article 21 form the golden triangle which stand for equality and the rule of law. We are the largest democracy in the world. There are 121 languages, 270 mother tongues, hundreds of castes, and different religions. In spite of all these, the country is doing so well only because we believe in unity and diversity. The government has a duty to ensure that social, economic as well political justice, is given to all citizens of the country as provided in the directive principles of state policy.”

I was particularly struck by how the learned Judge emphasised that dialogue and discussion was important to address difficult issues.  The dialogue he was starting in his lecture was widely reported. 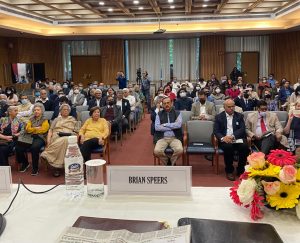 The lecture was received assiduously by the learned audience and was much appreciated.  It was an important contribution about how the Supreme Court could expand and develop the constitution of India. There was no suggestion that this was “judge-made” law and rather, that this was the law working harmoniously with the Constitution to develop and interpret the Constitution.

The vote of thanks was made by the Co-chair of the CLA Papers committee Madhavi Divan ,the additional Attorney General, and while we have been working with Madhavi regarding the CLC 23, it was great to appear in person with her at this inaugural event. At the conclusion of the lecture, the University took the opportunity of making a presentation to a student of the Soli Sorabjee Human Rights Endowment Award.  The young student was clearly delighted to be in the company of a Supreme Court Judge and received his award and other presentations from the platform panel. 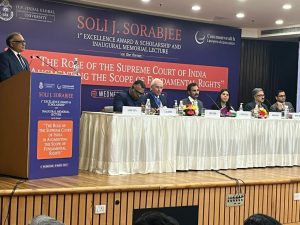 All in all, this well attended event reflected well on the Commonwealth Lawyers Association and thanks are due to Steven Thiru the Vice President, in whose region the event was held, but who could not travel because Covid restrictions.  Especial thanks were due to immediate past President, Santhaan Krishnan, who had been attentive in inviting many colleagues to attend and who had made all the arrangements with the IIC.

Santhaan should be well pleased at the success of this inaugural event, and once again we are indebted to him for his diligence, attention, and energy in creating a wonderful occasion.

If you missed the memorial lecture, it is available to watch here.