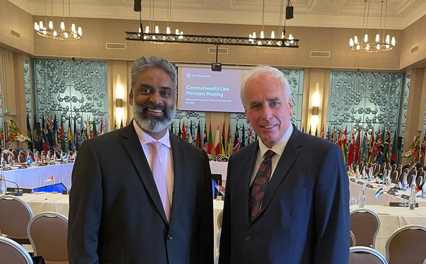 I was pleased to attend the Commonwealth Law Ministers meeting (CLMM) on 23rd, 24th and 25th November 2022 which took place in Mauritius. I was able to stay at the conference venue, the marvellous Intercontinental Balaclava.

Having arrived the day of the opening ceremony, there was a short period of time on that day to see a little of Mauritius. I teamed up with Andy Beattie, the President of the Commonwealth Association of Legislative Council based in Scotland. He and I took in a trip to the capital of Mauritius, Port Louis. We wandered through a fruit and vegetable market marvelling at the colours and variety of produce. We looked at the 19th century immigration centre and learned of the huge movement of population from various provinces in India to Mauritius to provide labour for plantations and other activities. We then walked through the waterfront area and had just enough time to visit a wonderful public gardens and park known as Pamplemousse Gardens.

It was then on to the reception hosted by the Secretary General and there was an opportunity to see some old friends such as the Minister of Constitutional and Legal Affairs in Jamaica, The Honourable Marlene Malahoo-Forte.

I spoke to the Attorney General of Brunei Darussalam and sitting at the same table as me were the UK delegation and I very much enjoyed interacting with the Scottish Government representatives, including the Scottish Solicitor General.

The dinner featured a speech of welcome from her Excellency, Baroness Scotland, the Secretary General of the Commonwealth and the Prime Minister of Mauritius. There was a cultural dancing display showing the evolution of the diverse Mauritian people from India, from Africa, and with a Chinese influence. The evening was rounded off with some contemporary classics played by the Mauritian police band.

The next day saw a reasonably prompt start of the business and the programme was well chaired and coordinated by the Attorney General of Mauritius, the Hon. Maneesh Gobin. There were presentations on access to justice which stimulated many of the countries represented to share their initiatives for providing access to justice, whether through small claims ADR initiatives or using technology for remote hearings and there seemed to be an appetite for demonstrating that access to justice was important and available.

There were also presentations from experts on the number of people who were deprived of access to justice and Professor Susskind gave a now not unfamiliar presentation on how Courts were a service not a place and that service could be provided asyncychronistically.

The pattern of the meeting allowed an initial summary of the topic under discussion to be given by conference secretary Professor Franceschi and then the Chair invited comments from the delegates. I found the engagement of delegates was significant and well informed and helpful.

The next day was significant in that I was to present to the Law Ministers a summary and description of the evolution of the Commonwealth Media Principles. During breaks I had quietly canvassed opinion from a number of delegations, including Seychelles and Canada and UK, and of course Jamaica. I felt that there was likely to be support but equally wanted to present the principles in a way that would not unsettle Law Ministers.

I was given the floor and presented my comments which were hugely informed by work undertaken prior to leaving for Mauritius with the Media Working Group comprising 6 organisations, including the Commonwealth Journalists Association, who all had entrusted me with the task of presenting the media principles. The presentation went well and stimulated an initial contribution from Minister Marlene Forte who was invited to lead the discussion, as Jamaica had chaired the Expert Working Group which reviewed the draft principles produced by the 6 Civic Society organisations.

Following her presentation, which was very emphatically to support the principles, the floor was then taken by 12 other jurisdictions all of whom supported the principles and warmly recommended their endorsement. In addition, they asked that they be taken forward for approval at the next Heads of Government meeting in Samoa in 2024 and furthermore, they approved a commitment to work with the civic society organisations.

The Secretary General asked for confirmation that all agreed with the endorsement of the principles which was given a strong verbal affirmation.

That evening there was the Secretary General’s reception on an island accessed by a wooden walkway from the hotel. We enjoyed a magnificent setting sun, some music and I interacted with the Secretary General who introduced me to the Prime Minister of Mauritius, Pravind Jugnauth, and I spoke with the Attorney General of Mauritius but also to the Ministers of Justice for Rwanda and for Tanzania and the Attorney General of Malta, and many other officials who were present.

On the final day of the conference the accredited organisations gave their activity reports. I was pleased that, in the agenda prior to delivering the CLA activity report, that matters such as mediation and the Singapore Convention (to which I had contributed a paper), child sexual exploitation and child marriage and military justice all received a mention.  I was able to inform delegates of the work of the CLA in all these matters.

Overall, I felt that I had benefited from being at a previous Law Minister’s Conference in Columbo in November 2019. This meant that I was more in tune with what was happening and knew some of the people who were present. What was also of huge assistance was the fact that we were on such familiar and good terms with the Secretary General and with Professor Franceschi. This was a good opportunity also of meeting some of the new staff members of the Peace and Governance Directorate.

Those connections ensured an enjoyable conference and all of the other connections, with so many Law Ministries from across the Commonwealth, ensured a high profile for the CLA.

I would strongly commend that the CLA remains involved with the Law Minister’s meeting and retains and enhances its close connections with the Commonwealth Secretariat.