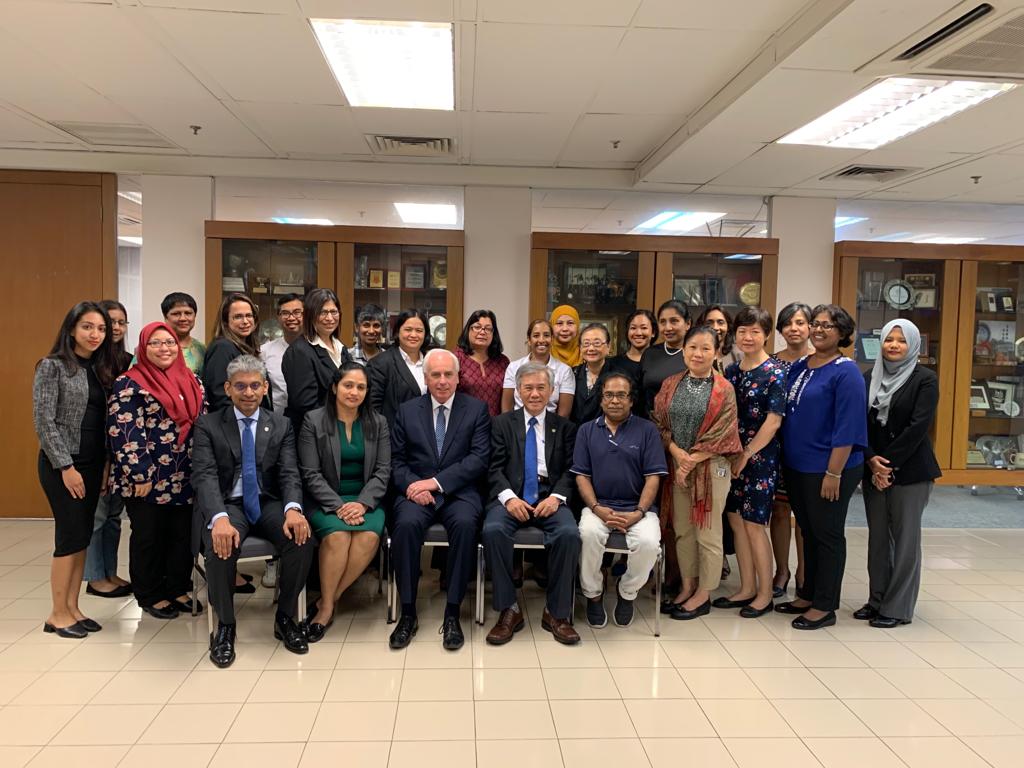 After meeting the Commonwealth Law Ministers in Colombo, Sri Lanka, to deliver a report on the activities of the CLA, I travelled to Kuala Lumpur to meet with Steven Thiru and others from the Malaysian Bar Association. The purpose was to chair a roundtable discussion on child marriage, in the context of the CLA report on Child Marriage in the Commonwealth, and to consider the impact of the law in this difficult and sensitive area.

Before the roundtable meeting however I was entertained by Cyrus Das, CLA Life President, to dinner. Also present were Steven and the immediate past President of Law Asia, Mr Christopher Leong and accompanied by our respective wives. We enjoyed a lavish dinner at the Lake Club, Kuala Lumpur and as we in Ireland might say the “craic” was mighty.

The following day Steven arranged for me to meet for lunch with members of the Bar Council of Malaysia including their Chief Executive and other Council members. After a generous lunch I feared a little about my capacity to deliver the child marriage roundtable discussion however I need not have worried as the group Steven had assembled were representative of a range of interested stakeholders in this area. These included government policy advisors from the Department for Family. There were also members of the Bar Council’s Family Committee and other stakeholders working in the field including people working with Rohingya refugees.

I gave an initial summary of the CLA Report hopefully treading sufficiently carefully so as not to offend any cultural sensitivities. However I need not have worried as the conversation flowed effortlessly with excellent contributions from those attending. They spoke freely about the problem, about their experience and of course the conclusion was it is not just a legal framework that needs to be established but there needs to be a multifaceted response.

This includes the setting of a clear direction from government and the need to provide education and support. There was some discussion about creating social media campaigns and I met an enterprising contributor who had produced a film with testimony from young brides regretting their experience and urging independence of thought and consent to marriage.

This meeting started at 4pm and ended at 6pm and was a perfect showcase for the CLA Child Marriage report. Afterwards I presented this formally to the Bar Council of Malaysia. I, in turn, was presented with a Bar Council tie and Stephen Thiru wound up the event by mentioning the CLA, encouraging people to take an interest in its activities and we then posed for a group photo.

Thanks are due to Stephen and to the Bar Council of Malaysia for arranging this impactful event.