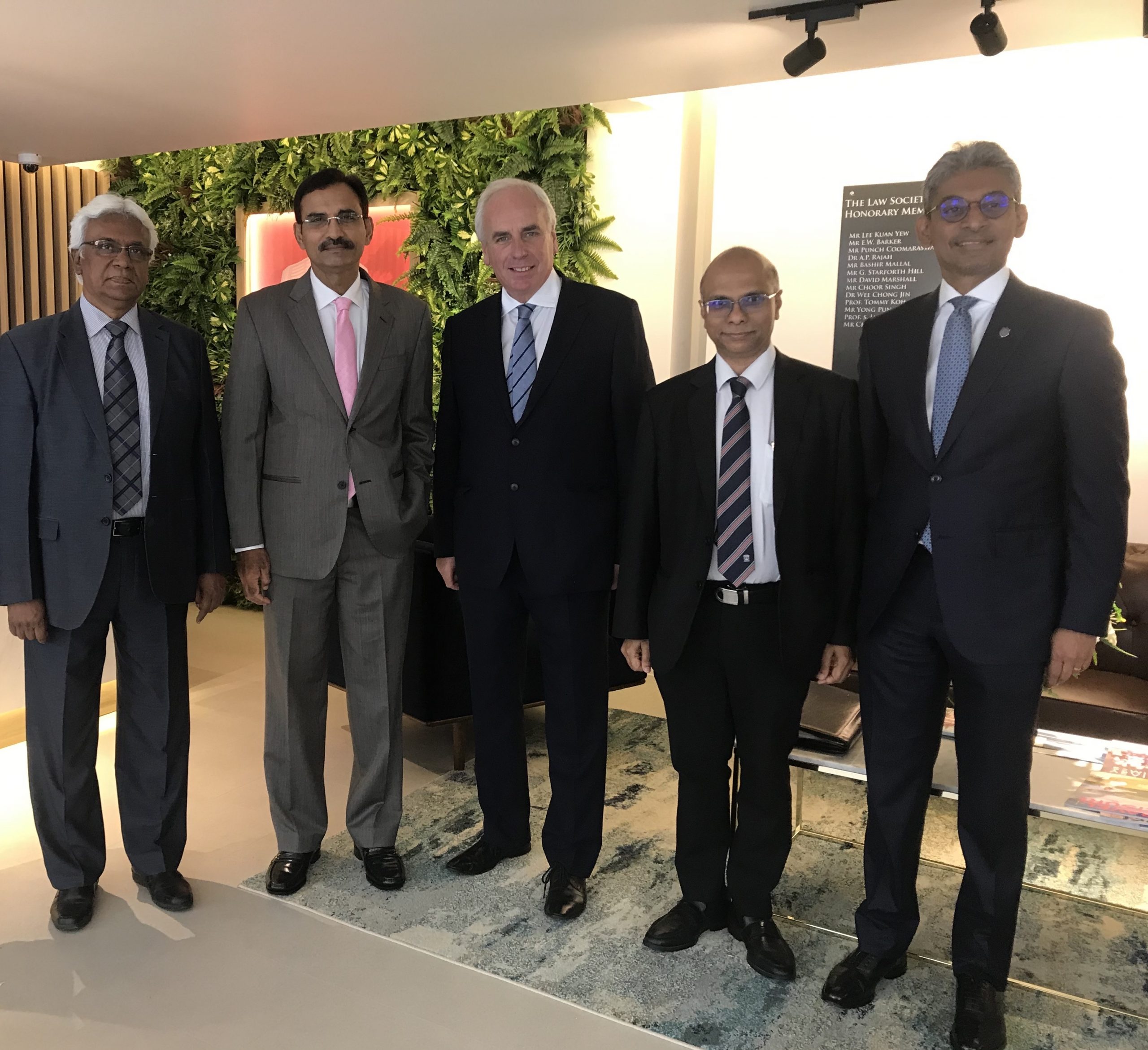 On Tuesday 12th November I was accompanied by Steven Thiru Vice President for Australasia when we flew to Singapore for meetings, in particular with the Law Society of Singapore. Upon arrival Steven had arranged a meeting with one of the CLA main sponsors – LexisNexis. We met at their offices and met with Gaythri Raman who is the Managing Director of LexisNexis for South East Asia. I was able to explain a little of the work of the CLA including the child marriage workshop conducted in Kuala Lumpur. Gaythri had assembled a team of colleagues including a colleague who had been actively been working in Myanmar.

As a presentation about the work of Lexis was provided to us it became very clear how fortunate CLA is to have such a committed partner organisation in LexisNexis. Their goal and motivation is to promote the Rule of Law. They work in a way which is unchallenging and seek to partner effectively.

There were three areas in which they had an interest namely ongoing, continuing legal education, the use of technology to deal with indigenous land rights and of course upholding Rule of Law issues. These could involve capacity building in some jurisdictions.

As I have an interest in legal vocational training the conversation spent some time on considering what the CLA could do in terms of providing some capacity building for developing countries and Law Societies regarding a CLE programme. Steven in particular expressed an interest in providing support to some of the Pacific Island Commonwealth communities and drew on his experience of his recent visit to Fiji.

I found it particularly fascinating to see the project that was being undertaken in East Malaysia to try and provide rights to indigenous communities with regard to their land settlements and occupation. Using modern GPS technology they were able to interact with local communities and identify those areas which had become settled but also identify those areas where the indigenous communities roamed either for hunting and gathering or for other ceremonial aspects. Steven spoke with some passion about cases in which he had been involved where it was important to have actual information from testimony and also from maps and other sources which could identify the reach of local communities with a view to establishing some form of customary land ownership rights.

I recalled how in 2012 I had arranged in Belfast a Commonwealth Lawyers Property Law Conference attracting speakers from Malaysia, Canada, New Zealand and Australia. Given my ‘day job’ I explained to LexisNexis how I would like to pursue issues of property and title with them and at one stage I found myself contributing to a technical legal discussion about how the indigenous communities featuring in the LexisNexis presentation need not necessarily establish ownership to have rights and those rights could be in the way of easements to roam, to gather crops and to access land.
Given the state of land registration that is described I also contributed how in Northern Ireland there was still a very considerable number of real estate transactions which involved unregistered title. I feel that the LexisNexis meeting will provide much fruitful source of activity for the CLA during the rest of my presidency.

We were entertained at a Peranakan restaurant in Singapore by the LexisNexis team and thanks are due to Gaythri and her colleagues for a most interesting afternoon and very generous hospitality.

I should add that towards the end of the LexisNexis presentation our immediate past President Santhaan Krishnan arrived and we warmly greeted him. He had travelled with a Judge of the Supreme Court of India who was to be a speaker the following day the Law Society of Singapore.

The following day Wednesday 13th November Steven, Santhaan and I attended at the offices of the Law Society of Singapore and met with Gregory Vijayendran and other colleagues from the Law Society including their Chief Executive, Delphine. This meeting allowed me to share the activities of the CLA with these senior representatives of the Law Society of Singapore and extracted the exciting confirmation from President Gregory that he would propose to their next Council meeting that the Law Society of Singapore should once again join as an institutional member in the CLA.
The purpose of our meeting at the Law Society’s excellent offices at Maxwell Chambers, Singapore was to present a seminar entitled ‘Mediation – a Commonwealth Perspective’. I was to be one of two speakers, the other being the Honourable Justice R. N. Rao, a Judge of the Supreme Court of India. After a pre-seminar photograph and some initial conversations with Justice Rao I was impressed to see approximately 100 Singapore lawyers gather at their Law Society lecture facility. I took the opportunity of speaking to those attending and found, as one would expect, some mediation enthusiasts, some sceptics but an appetite for learning more.

Gregory, as President of the Law Society of Singapore, introduced the event and asked Steven Thiru, as Vice-President for Australasia, to say some words about the CLA. Steven gave an excellent presentation using the CLA PowerPoint and drew attention to the work of the CLA, the projects and of course mentioned the next conference in the Bahamas. He mentioned the roundtable discussion on child marriage which had taken place in Kuala Lumpur and invited me to present to President Gregory the CLA child marriage report which I did. The seminar proper started with some very insightful remarks made by Mr Lim Tat – Managing Partner, Aequitas Law LLP, the moderator and a distinguished Mediator and leader in this field in Singapore. He invited Mr Justice Rao to contribute his thoughts first. This turned out to be an excellent discussion of how mediation was slowly evolving in India and gave a Judge’s perspective on those cases where mediation would be appropriate where he thought it could come up with solutions which were superior to those offered by the Court. He referenced in particular a dispute over what was in effect a commercial rent case which he had urged the parties to resolve between themselves. He was mindful of the limited time available in Court and he was also concerned about appropriate distribution of Court’s time to cases which genuinely needed a resolution by the form of a Court decision. It was interesting to note that many mediations were carried out as a pro bono activity and he thought that that should change as he acknowledged that mediation was a challenging activity involving skills and requiring experience and he espoused the notion that mediation should be recognised as a profession.

I then presented my own thoughts on what mediation was, where it was advantageous to use and how mediation had been used to resolve the Northern Ireland social and political conflict. I also made a business case as to why mediation was good for lawyers. I mentioned that it could result in an increasing turnover of cases, clients who were satisfied though having participated in the mediation process and the discussion then turned to questions.

There were inevitably questions about the impact on lawyer’s fees. I countered this by saying that lawyers had an obligation to act in the best interest of their client and in many cases it would be difficult to justify spending many years in pursuing a case in Court when there was an alternative available. I made reference to the Belfast CLA Mediation Conference in 2014 where Lord Dyson, one of the key Judges in the Halsey v Milton Keynes NHS Trust seminal case in the UK, had mentioned that now, no lawyer conducting litigation should be unaware of the importance that mediation would play.

Following that meeting I took the opportunity of having a short discussion with Santhaan and Steven to encourage Steven in arranging other such events in his region and to assure him of CLA support.