It was an honour for CLA to work with the Commonwealth Secretariats Office of Civil and Criminal Justice Reform (OCCJR) to bring  an official side event on Technology and Access to Justice at the Commonwealth Heads of Government meeting (CHOGM) in Kigali, Rwanda. I was delighted to chair the excellent panel comprised the Honourable Chief Justice of Rwanda Dr Faustin Ntezilyayo, Professor Luis Franceschi ,Senior Director Governance and Peace at the Commonwealth Secretariat, Pheona Wall, the President of the Law Society of Uganda and Gertrude Too-rom Lamunu who was the marketing director of an initiative called Law Box organised by Barefoot Law which operates in Uganda.

I also met some of the students participating in the legal debate.

In my introductory remarks I explained the theme setting the context and referencing the Commonwealth Secretariat Commission Paper on the role of AI in judicial proceedings and referencing the Latimer house principles, the Commonwealth Charter and the Law Ministers Statement on access to Justice on Technology arising from the Law Ministers meeting in Sri Lanka in November 2019, which I had in fact attended.

The Chief Justice spoke about the remarkable progress the Rwanda Judicial System had made with regard to incorporating technology.  As an aside, when I met with the Moise Nkundabarashi, President of the Rwanda Bar Association that evening, he showed me his mobile phone and how on his phone he has a listing of all his cases, dates they would be heard, dates of any administrative reviews and copies of all the pleadings.

The next to speak was Professor Franceschi who spoke of the Commonwealth support for technology, and the concern about access to Justice creating a digital barrier to Justice if technology was not used appropriately.  Pheona Wall of the Uganda Law Society spoke in a very engaging way of the work that ULS had done, but also more widely about how technology, if the right connectivity was available, could certainly speed up the processing of matters and the time spent for lawyers, especially in travelling.

That set the scene for an excellent presentation by Gertrude Too-rom Lamunu to speak about the  Barefoot Law, Law Box project.  She showed slides of a mobile converted shipping container and how it was divided into a waiting room and consultation room, and was fully equipped with technology enabling the citizen to receive legal advice directly from lawyers in Kampala.  She shared compelling examples of how bringing advice to communities allowed rights to be upheld.

After some supplementary questions from me to the panel, there was then an opportunity to take questions from the floor and there was an immediate energetic show of hands.  I asked John McKendrick QC, a member of the CLA Executive Committee, to speak, and he contributed well about the need to ensure access to Justice and the need for care in Family Proceedings. I then moved to CLA Past President, Santhaan Krishnan.  Santhaan flagged the work that India was doing in relation to use of technology, and he mentioned how many lawyers from India did not have connectivity and so emphasised the digital barrier point.  Other contributors from the floor made their points and a lively session allowed me to conclude just a little overtime, by inviting the Minister of Justice to make her concluding remarks. 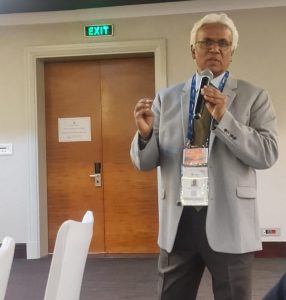 I then thanked the Commonwealth Secretariat and the audience and asked them to return for the inaugural legal debate.

The legal debate comprised four teams, one of whom was reduced to one person because of Covid affecting the other member of that team.  There were teams from Rwanda, Uganda, Tanzania and Kenya.  The theme was the use of artificial intelligence in the criminal law system.  There was a proposer then an opposer. Then questions raised by the opposer to the proposer and from the proposer back.  In the first round we identified the best team but that was the team reduced to one member. We picked one of the Uganda team to pair up with him and put another team from Tanzania through.  They then were asked to reverse roles and the winner was the student, plus his new teammate.

Pheona Wall, who chaired the Judges’ panel, gave some feedback, asked me to give feedback on their work as a team and asked John McKendrick, who joined us as judges, to give feedback on the growth of the participants through the debate.  The outcome was received warmly, and we presented trophies and plaques to the winning team and stayed for photographs. 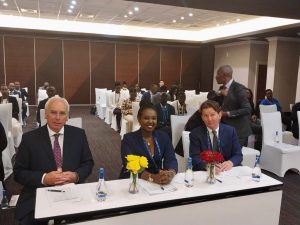 The Commonwealth Secretariat were delighted with the success of the event, which will become a regular feature during the Heads of Government meeting and would henceforth be called the Commonwealth Legal debate. Our special thanks go to Francisca Pretorius, Head of the OCCJR and her team at ComSec who did amazing work to bring these events to fruition and with whom CLA are enormously grateful to partner. 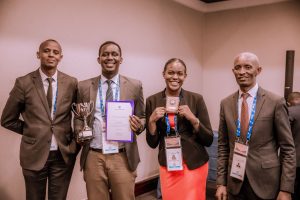 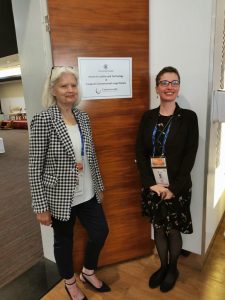