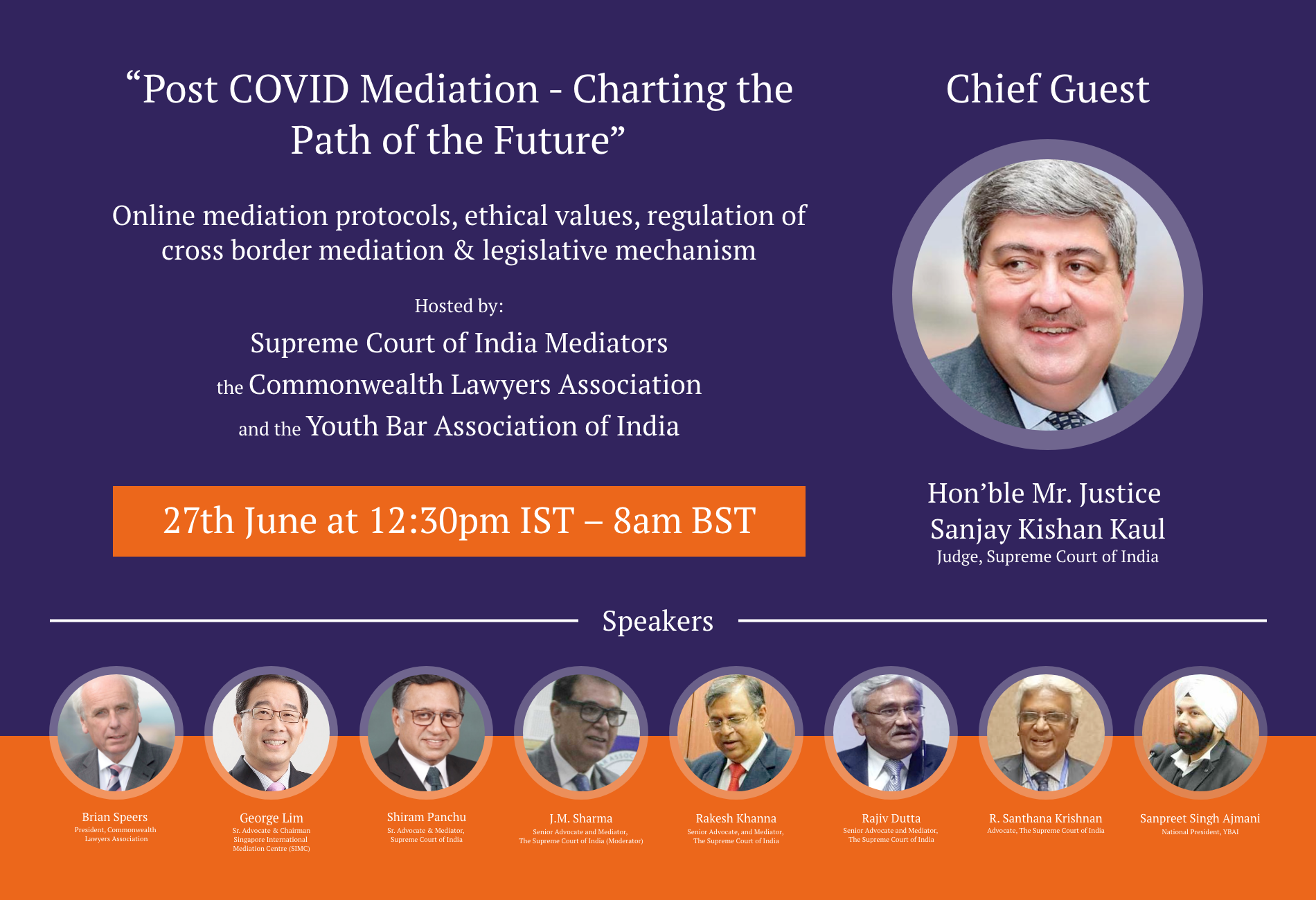 On Saturday 27 June at 12.30pm Indian standard time (8.00am UK time) I found myself as part of a panel arranged through Zoom and facilitated by the Youth Bar of India.  The panel was of some eminent speakers including the Honourable Justice Mr Sanjay Kishan Kaul, a Judge of the Supreme Court of India, Mr George Lim, Chairman of the Singapore International Mediation Centre and Mr Sriram Panchu, Senior Advocate of the Supreme Court of India and Mediator.  I was pleased to join such distinguished company.

There was a gracious welcome and introduction of the panellists by our own immediate past President – Santhaan Krishnan to whom enormous credit must be given for organising this webinar and bringing together the panel and ensuring that the technical aspects were managed.  There were 1300 people registered and approximately 800 people observed the webinar as the sessions unfolded.

After Santhann’s introduction we were then provided with an overview of mediation and setting of the context by Mr Rakesh Khanna, senior advocate and mediator of the Supreme Court of India, who referenced the importance of mediation as a flexible option which all lawyers should be trained in and of which they should be aware.

The meeting then passed to Mr Jitendra Sharma, senior advocate of the Supreme Court of India and mediator and a regular attender of Commonwealth Law conferences where he has participated in sessions dealing with mediation.  Jitendra kindly introduced each of the speakers and managed the process.

The next speaker was a renowned mediator in India – Mr Sriram Panchu who has been appointed in several high profile disputes and has carefully managed the parties through to resolution.  He is highly regarded and his remarks were attentively received.

I was then called upon to speak and was able to give a broad perspective of experiences gained from participating in CLA webinars dealing with arbitration and mediation as dispute resolution options and drawing on recent experience as having acted as mediator in commercial disputes undertaken by Zoom.  I provided some practical examples of skillsets that needed to be developed for online mediation and took the opportunity of mentioning the work which the CLA was doing in the context of mediation and inviting those observing the webinar to consider taking part in the CLA through membership or through attendance at a conference.

The big draw of course was the chief guest – a judge of the Supreme Court of India and something of a champion for mediation in India.  Mr Justice Kaul did not let us down and gave a crisp and insightful overview of mediation and also referenced the proposal for mediation legislation which was under contemplation in the Indian parliament.  There then followed a question and answer session with Jitendra Sharma taking questions from those submitted and asking Mr Justice Kaul, Mr George Lim and me questions.  Mine concerned ongoing continuing education and training and I was able to emphasise the importance of ensuring that all new lawyers during their training are made aware of mediation and I also emphasised the need for professional standards and codes of conduct to ensure that mediators acted with integrity.

The webinar was concluded with some helpful summarising observations by Mr Rajiv Dutta, senior advocate and mediator of the Supreme Court of India. The speakers were then informed of the numbers attending and the fact that there had been persons in attendance from Uganda and Milawi and Kenya as well as India and Pakistan and Bangladesh and also the UK and Trinidad.

With the numbers who registered, the numbers who observed, whether on the Zoom presentation or through Facebook or on You Tube, this was an extremely successful webinar extending the reach of the Commonwealth Lawyers’ Association and demonstrating what technology can do to assist in capacity building, skills building and extending the reach and relevance of the Commonwealth Lawyers’ Association.

My thanks are extended to the Youth Bar of India – Mr Sanpreet Singh Ajmani, the President and to Mr Yusef Abdul who was in charge of all the technical requirements.

Finally and a special word of thanks and gratitude is extended to our past President, Santhaan Krishnan whose idea it was and whose assembly of the panel was impressive and of great benefit to the CLA providing it with an enduring content.