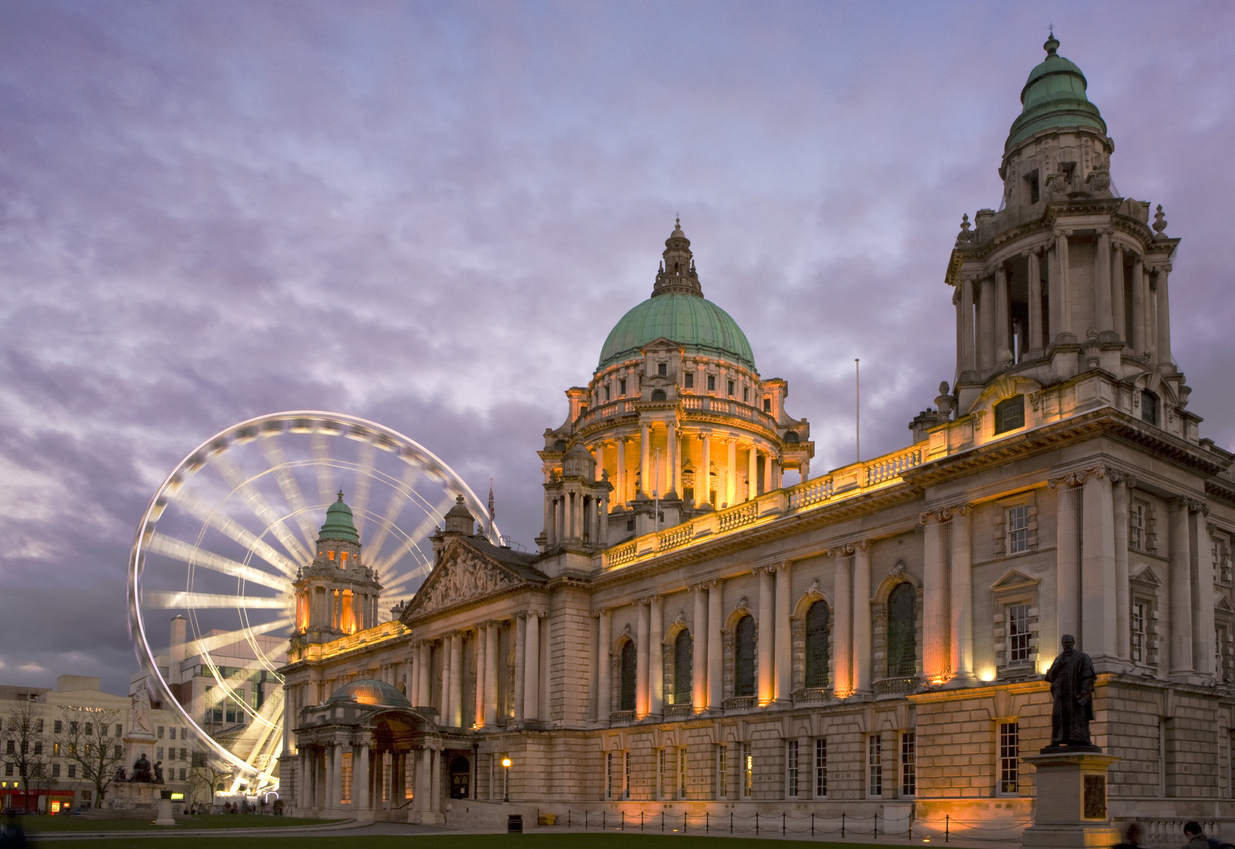 Europe / Report on the 2nd European Hub meeting in Belfast

The 2nd Hub meeting took place in Belfast on 13th September 2019. It was hosted by CLA President Brian Speers and
Vice-President of Europe, John Almeida.

Those attending arrived on Thursday, 12th September staying close to Belfast City Hall where we had been graciously invited by the Law Society of Northern Ireland to attend their annual Law Society Council Dinner.

The Belfast City Hall was a grand venue for the dinner which was held in a high-ceilinged ball room with sculpted, arched and very tall windows. We were treated to a sumptuous repast. Ms Suzanne Rice the current LSNI President made a toast to the guests. Mrs Jackie Henry of Deloitte proposed a toast in response on behalf of the guests to the LSNI. The company was interesting and varied. Members of the Judiciary, politicians, academics other members of civic society and of course colleagues from the Law Societies and Bars of Scotland, England and Wales, and the Republic of Ireland as well as those attending form European jurisdictions in the Commonwealth – Cyprus, Isle of Man, Jersey. Of course, many Northern Ireland solicitors were present and I had the pleasure, during the meal, of a long discussion with my immediate neighbour, Colin Hanna the Legal Advisor to the Chief Constable of the Police Service of Northern Ireland.

After the dinner, we were invited by the President to join her and colleagues at a nearby hostelry for a night cap. I regretfully declined as I was beginning to feel the effects of a 4am wake-up but some went along and stayed until the early hours!

The following day, Friday, 13th September, was the day for our European Hub meeting. The Meeting took place at the impressive offices of the Law Society of Northern Ireland, just down the road from the City Hall where we had dined the night before.

We commenced following a brief tour of Law Society House. Adjourning to their board room for the Meeting, we were offered a spread of breakfast delicacies and coffee or tea.

Suitably fed and watered, we were welcomed by our local host, our President, Brian Speers, and formally by John Almeida, the Vice-President for Europe who welcomed the great opportunity these meetings gave us to get to know each other and for exchanges of views on topics of interest or concern or both to us all.

The topic for the morning was Child Marriage and Human Trafficking. Our speaker was Colin Hanna to whom I have referred above and who with Les Allamby, the Chief Commissioner of the Northern Ireland Human Rights Commission gave us a sobering summary of how they deal with the modern scourge of abuse of people of all ages and both sexes in this staggeringly profitable area of criminal enterprise. They were accompanied by two senior police officers of the Police Service of Northern Ireland who were part of the team specifically targeting this area of criminal activity. In relation to the plight of many women who were victims of trafficking, forced marriages, marriages as children and gender-based violence, we were reminded that many of them came from mainly patriarchal societies where women were regarded as hardly more than chattels. As Les Allamby pointed out what was described as happening locally in Northern Ireland was not confined to that part of the UK or Europe but was pervasive – as was confirmed by John Mulholland the President of the Law Society of Scotland who contributed on the experience in Scotland.

We rose for lunch at 12.30 at which point President Brian Speers had arranged for us to go and meet The Honourable Mr Justice Huddleston in his Court. He had been a guest the previous evening at the LSNI Council Dinner and is the first solicitor to have been appointed to the High Court in Northern Ireland. He was a former President of the Law Society for Northern Ireland and attended the CLC in Melbourne where he spoke at two sessions. We returned to the Meeting to have a quick lunch before sitting down for the afternoon session.

The afternoon was devoted to a discussion concerning the regulation of the legal profession from the NI standpoint. We had a speaker, Mr John Guerin who was a past president of the LSNI and experienced in the disciplinary procedures involving various professions – most notably nursing and midwifery. Neville Benbow CEO of the Law Society of Jersey also contributed. We learnt that contrary to the practice in England and Wales where the regulatory and disciplinary teeth of the Law Society of England and Wales had been drawn and transferred to the Solicitors Regulation Authority. In both NI and Jersey the local Law Society retained their regulatory and disciplinary role. We had much discussion about procedures in disciplinary proceedings, our speaker, John Guerin having concern about what he regarded as flawed processes, particularly at the early stages.

By 3pm we were starting to lose some of our delegates who had to get planes back to their home destinations – Santhaan Krishnan, our immediate past president, who was over from New Delhi, Lorna Jack and Katie Hay of the Law Society of Scotland from Edinburgh who attended with their current President John Mulholland. Accordingly, the meeting adjourned at 4.00pm. At this point Laris Vharimis, who is a member of the Cyprus Bar Association, invited us all to Cyprus for the next European Hub Meeting, an invitation which was warmly received.

Thus ended our second European Hub Meeting. The remaining eight of us were taken by Brian for a walk around Belfast on what turned out to be a beautiful afternoon where we ended up enjoying a pre-prandial cocktail on the terrace at Le Parisien overlooking Belfast City Hall. We later gathered for an excellent meal at the James St restaurant in – you guessed it – James Street South.

The meeting of the CLA European Hub was great fun and also illuminating and once again showed the value of sharing experience and forming connections.

Thanks are due to the Law Society of Northern Ireland and our President for making the arrangements and the Vice President for Europe for hosting.