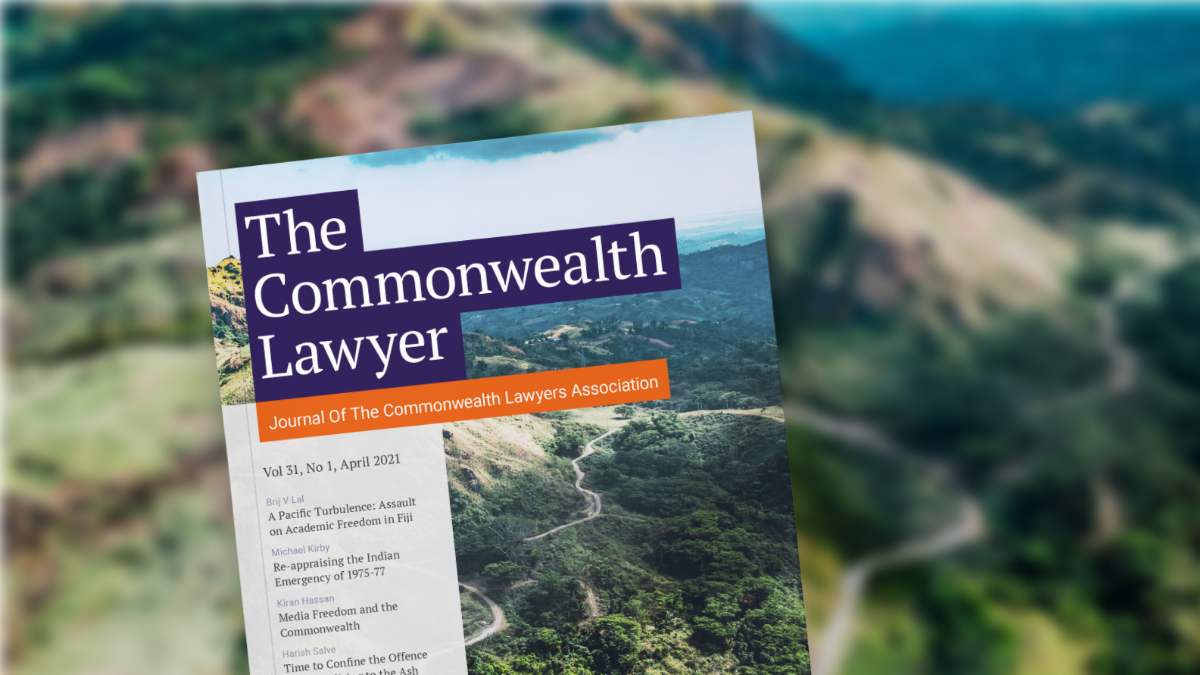 Journal / A celebration of “The Commonwealth Lawyer”, one of the jewels in the CLA crown

The Commonwealth Lawyer has been the CLA’s principal vehicle of information and knowledge dissemination for nearly five decades.  Founded in 1984, it went out of publication for a brief period in the late 1980s and 1990s, but was revived – in its current, enlarged format – at the start of the millennium and has been in continuous publication ever since.  The journal offers readers a rich mix of scholarly articles, news and information about events, book reviews, and updates on legal developments in and around the Commonwealth.  The journal is read by practising and academic lawyers, judges, legal administrators, students and others in all the countries where the CLA has a presence – and, occasionally, further afield as well.

Until  2014, the CL was published in hard copy form and mailed to all members of the CLA from its then headquarters in London.  Although the mailing costs, especially to the far-flung corners of the Commonwealth, were high, the journal received sponsorship from a leading publishing house which permitted the absorption of those costs.  Unfortunately, that source of revenue dried up when a restructuring of the publishing company led to a termination of the sponsorship deal.  For a further two years, the printing and distribution of the journal was supported by one of Malaysia’s prominent law publishers, but that arrangement could not be extended in the face of rising costs.  As a result, the CLA decided to take the painful step of distributing the journal in electronic form alone.

Even so, the journal continues to be received and appreciated by its loyal band of readers across the Commonwealth.  It also attracts high-quality contributions from lawyers, judges and other members of the legal fraternity.  Suggestions have been received from time to time for new features to be added – including a digest of important cases from around the Commonwealth – but lack of resources makes that difficult for the time being.  We are, however, planning to bring out a special, bumper issue in August 2021 and to distribute it in hard copy form at the Commonwealth Law Conference scheduled for 5-9 September in Nassau, The Bahamas.

We hope that CLA members will continue to support the journal.  Articles and other items of interest are always welcome, as are offers of sponsorships.  The CLA would particularly like to hear about possible sources of funding which will enable us to resume physical printing and distribution of the journal.  You can write to us at our current headquarters in Canterbury, England (or, in the case of editorial issues, e-mail Dr Venkat Iyer at commonwealth_lawyer@hotmail.com).  Either way, we look forward to hearing from you.

Here are what some of our  The Commonwealth Lawyer long-time supporters say of the publication:

“One of the enduring benefits of being a Commonwealth lawyer (or judge!) is that we have a shared legal experience, albeit expressed with different accents.   The Commonwealth Lawyer is a marvellous vehicle for the exchange of information, ideas, perspectives and experience.  This is especially so when our opportunities to meet in person are limited or even non-existent.  And when we are able to get together, The Commonwealth Lawyer Is also there, reminding us what a unique and valuable legal community we are privileged to belong to.” The Hon Mr Justice Graeme Mew, Superior Court of Justice, Ontario, Canada.

“Commonwealth Lawyer: a treasure house of events and articles written by some of the Commonwealth’s greatest advocates of the rule of law. As relevant today as when they were first written. Superbly edited by Dr Venkat Iyer.” Colin Nicholls QC, Hon President, CLA

“The Commonwealth Lawyer has grown from strength to strength especially under the editorial hand of Dr Venkat Iyer. Apart from articles espousing the cause of those deprived of the true benefits of the Rule of Law the journal also contains useful information on subjects of current interest. With the advent of its electronic version one’s anxious wait for the journal in the post has been done away with. I wish the Commonwealth Lawyer the success it richly deserves” Dato’ Seri Gopal Sri Ram, former Judge, Federal Court of Malaysia