The Conference took place at the University of Birmingham Teaching and Learning Centre and was generously sponsored by Number 5 Barristers Chambers, Cloud Systems Group, Gowling WLG and Cornwall Street, Barristers.  For the CLA, this was a superb opportunity to make connections with the University of Birmingham and the Barristers’ Chambers who sponsored the event as well as other solicitor firms in the region. In addition, the CLA were able to consolidate our connections with the Birmingham Law Society, established through Eileen Schofield, a delegate at the Commonwealth Law Conference 2021 in Nassau..

The Conference proved to be exceptional in terms of the quality of the sessions and the speakers. Superbly compered by CLA Executive Committee member John McKendrick QC, the Conference ran to time and allowed an opportunity for many interesting issues to be explored.  It was a delight to see in person CLA Council members from Pakistan, Hasan Khan, from Bangladesh Muddasir Hussain and from Malaysia Vice President Stephen Thiru. They were ably supported by Treasurer Laurie Watt, Council member for England and Wales David Greene and of course our secretariat team of Brigid Watson and Clare Roe.

I had the opportunity of opening the Conference by introducing the Mayor for the West Midlands region Mr Andy Street. He gave a passionate overview of life as a Regional Mayor and how the Commonwealth Games although styled Birmingham 2022 was in fact regionally dispersed.

A long standing supporter of the CLA, the Rt Honourable Marlene Malahoo Forte QC MP attended and gave a keynote address.  Formerly the Attorney General of Jamaica, and in that capacity having contributed to past CLA conferences (in particular as a keynote speaker in Nassau the Bahamas), Marlene Forte QC MP is now the Minister in the Jamaican Cabinet for Constitutional and Legal Affairs.

Her keynote address on Freedom of Expression referenced not only the Latimer House Principles (which recognised that a free and responsible press was essential to proper functioning democracy), but also referenced the Principles on Media Freedom which the CLA have been endeavouring to promote and mentioned at the People’s Forum in CHOGM.  Recognising that corruption thrives behind closed doors and in secrecy the Honourable Marlene Forte gave an impressive overview of how essential to a functioning democracy was the freedom to express views.

The Conference provided an opportunity to explore child abuse and exploitation within sport and importantly raised the question of how to generate effective prevention arrangements.  Hasan Khan, who had contributed to the It’s a Penalty publication on child exploitation in the Commonwealth, which the CLA jointly supported, also contributed to this session.

There was a memorable session on image rights and data rights and privacy. Gemma of Think Studios, who provides the publicity for CLA provided a thoughtful contribution on creating, refreshing and protecting your image or brand. One of the Birmingham University lecturers gave a detailed consideration of image rights and some practical legal knowledge on how to protect image rights and what rights can be protected.

The session on Race in the Commonwealth which was chaired by John McKendrick QC featured a superb panel.  Steven Thiru made a thoughtful and legal analysis of the legal basis for race and equality.  Mark Fenhalls QC the Chair of the Bar of England and Wales gave some personal reflections from his own background but also explained the strategic approach taken by the Bar Council. The Keynote speaker, Marlene Forte MP QC, gave a quiet but memorable account about the scourge of racism, why racism leads to discrimination and how discrimination can breed resentment and disorder.  All agreed that the rapt attention paid to this session by the delegates was remarkable and it was a privilege to have attended.

The day ended with the opportunity to attend a splendid Gala Dinner in the Great Hall at the University of Birmingham.  Dressed in tuxedos and evening gowns the CLA team enjoyed excellent company at the dinner from other delegates, sponsors and our friends from the Birmingham Law Society.  Tony McDaid, Vice President of the Birmingham Law Society made some welcome remarks to those gathered for dinner in the Great Hall. I was able to also add my welcome to those attending and explain a little about the CLA not omitting to mention the Conference in Goa!  I was able to introduce Sarah de Carvalho the Chief Executive of It’s a Penalty, the charity for whom funds were being raised. 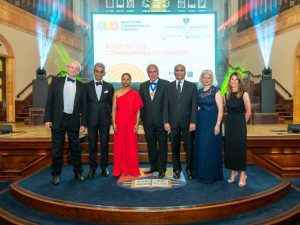 Day 2 of the Conference allowed me to introduce the Lord Lieutenant for the West Midlands, Mr John Crabtree who in addition to being the Queen’s representative in the Region was also Chair of the Organising Committee of Birmingham 2022.  A proud Brummie, Mr Crabtree was clearly immensely pleased that Birmingham was able to showcase itself and its region to a wider world.

I had the opportunity in taking part in a discussion on arbitration and mediation in sport.  There was a mixed panel of arbitrators and those who had been involved in mediation and I hope I was able to provide an international context for the growth and development of mediation referencing the Singapore Mediation Convention.  That proved to be appropriate given that the UK has recently announced that it intends to adopt and sign the Singapore Convention.

There were other sessions dealing with sports law contracts with two wonderful solicitor colleagues from Birmingham showing their expertise on the complexity of sports law.  This resonated with the first session on day one of the Conference where the head of legal advising the Games Organising Committee, Caroline McGrory, made reference to the fact that her team of twelve lawyers dealt with over ten thousand legal contracts relating to the Games!

With such a wide range of interesting topics I fully endorse a comment made by our Council member for Pakistan, when Hasan observed that it was lovely to return to being a student and that he had learned so much.  The CLA knows that keeping constantly up to date and informed is essential for lawyers and it was terrific to step into the world of sports law for a time.

This Conference gave a wonderful opportunity for the CLA to make an impact in an important region of England and Wales. We hope that many of the friends and colleagues from the Birmingham Law Society and those who sponsored this event will take an interest in the CLA and attend our conference in GOA.  Certainly, judging by the quality of the speakers available in Birmingham there would be no shortage of additional talent in Goa should our friends in the West Midlands chose to attend.