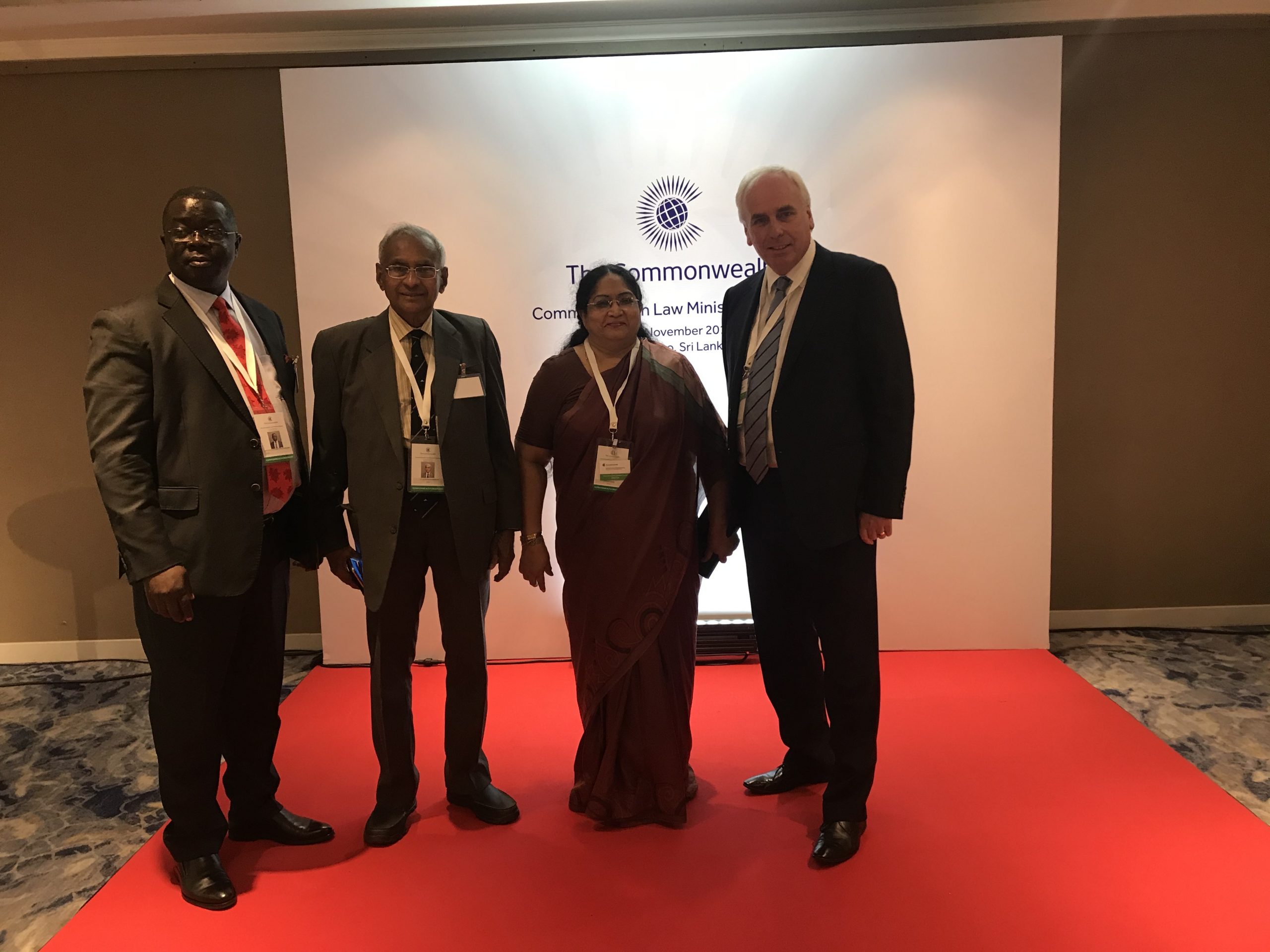 I was able to attend the CLMM at relatively short notice having made the decision to divert from attending Law Asia which was being held in Hong Kong. The Law Ministers’ Meeting gave an opportunity for the CLA to contribute its Activity Report and of course to interact with Law Ministers and with officials from the Commonwealth Secretariat.

I arrived at the start of Day 2 and was immediately impressed by the organisation whereby Law Ministers or Permanent Secretaries from Departments of Justice or Attorney Generals from Commonwealth jurisdictions all attended in a large room in the Hilton Hotel, Colombo. With Commonwealth flags abounding and with the Minister of Justice for Sri Lanka in the Chair, I was able to enjoy a full day of proceedings as one of only 3 observers in attendance.

On the following day we were joined by Therese Pewar who represented the Commonwealth Association of Legislative Council. There were only a few occasions when we were asked to withdraw while the principal Law Ministers held a closed session. I had the impression that this was simply to agree statements among themselves.

The first agenda item I noted was the Com Sec Report on Reforms and Civil Procedure Law.
The Attorney General for Jamaica who was a regular and impressive contributor to the entire meeting – Marlene Forte QC – emphasised the commitment of Jamaica to first class justice and also described how they had, with the assistance of Canada, introduced a mobile court to go to remote areas and provide access to attorneys in the mobile court. This proved to be a big success and 2 additional mobile court units were being provided. Apparently nearly 2,500 cases had been dealt with by this mobile court initiative.

This encouraged me to make contact with him and to describe how I would follow up my attendance at CLMM by attending in Singapore to discuss precisely the Mediation Directive and mediation issues generally in the Commonwealth.

The next item involved accessibility of justice. The impressive Minister of Justice for India referenced how India was using what he called leveraged technology to assist access to the court and to expedite the conclusion of the caseload. They had recruited a vast number of paralegals to assist moving cases on and he emphasised that accessibility to justice Indian style was to harness technology. The spokesperson for St Vincent mentioned their mediation programme with a view to providing a mediated opportunity in both civil and criminal cases akin to what in the UK we would call restorative justice.

Sir Richard Heaton the Permanent Secretary of the Department for Justice in the UK noted the benefit of digital justice, the move towards a technological court and described the paper court system as more designed for professionals than for users. He saw that in principle there was no difficulty in allowing citizens to file an application for probate or seek a divorce or sue for relief from a defective product all online.
He also described an initiative of ‘court in a box’ which apparently could be set up in informal settings but he believed would still provide the authority of the law as well as increasing access to justice.

After a working lunch I attended a Side Event whereby the detail of the Com Sec Report on Commercial Arbitration in the Commonwealth was considered.
Com Sec had worked with a Washington law firm London office – namely Wilmer Cutler Pickering Hale and Dorr LLP and 2 of the partners in that firm, Steven Finzio and Dharshini Prasad, described their research methodology under the guidance of Professor Petra Butler from Wellington School of Law, New Zealand. The redoubtable Marlene Forte QC introduced the panel and commended the work of this arbitration report. There was an emphasis placed upon how arbitration between small and medium enterprises engaged in cross border trade within the Commonwealth would find it beneficial to know that there was an enforceable dispute deciding mechanism. This was part of a wider consideration of how trade between Commonwealth members could be enhanced. Uncertainty as to the jurisdiction of the courts and the prospect of delay and jurisdictional disputes would all be removed by having an agreed arbitration for disputes involving Commonwealth countries trading with each other.

They identified the need for capacity building and to ensure that there was a quality delivery of arbitral decisions and the idea was that arbitral awards were enforceable in countries where they needed to be enforced.

This was all both familiar, but also interestingly new, as it gave a Commonwealth initiative to the UNCITRAL Model Law and to other international treaties which provided for arbitration as a decision-making process for cross border disputes.

I was the only contributor from the floor as it happened, and mentioned a concern about capacity and offered help from the Commonwealth Lawyers’ Association to provide arbitration training and to explore the interest of our members in offering their services and experience for that purpose. This was well received. I asked about the question of costs and whether the panel had considered ways of obviating costs by perhaps considering fixed fees and not requiring a 3-panel team of arbitrators as that often led to very partisan choices by those who believed that their role was to uphold the stance of the appointing entity. Finally, I mentioned was there space for their report to include a further option of mediation, particularly given the enforceability of agreements made in mediation following the UN Singapore Declaration.

The panel were concerned about costs and welcomed my intervention and also noted that mediation agreements were now much more enforceable given the Singapore Declaration although of course acknowledging that their report was about arbitration. There was extensive discussion with the panel after the conclusion of that side session.

The afternoon then continued with a consideration on pro bono work and mentoring which your President was unable to attend because he was experiencing the life endangering opportunity of a tuk tuk ride through downtown Colombo to visit extremely fascinating Buddhist temple of GangaRamaya. The evening concluded with a generous reception hosted in a fourth floor garden area of the Shangri-La Hotel and there was an opportunity to meet with Sir Richard Heaton and the rest of the UK delegation.

I also had a fascinating engagement with the Assistant Minister of Justice for Samoa who provided an insight into the legal world of the Pacific Islands which prompted an interest that that could become part of a regional strategic trip for the CLA, with a view to encouraging the very small Pacific jurisdictions.

On Thursday 7 November a very full day was enjoyed. The first session dealt with anti-corruption benchmarks. This brought about lively and fascinating contributions from the UK, Canada, India, Singapore, Jamaica and Rwanda, all supporting the Commonwealth benchmarks and all bemoaning the fact that corruption remained such a problem. Jamaica had a particular Integration Commission with a view to trying to focus their anti-corruption work in a single agency. Sierra Leone mentioned recently passing additional powers to their Anti-Corruption Commission. India talked about the need for greater synergy between anti-corruption agencies and was concerned about how to avoid incentive payments in the procurement contracts for large infrastructure approved by Commonwealth nations. They raised the question of identifying Bank accounts and ultimate beneficial owners of Bank accounts into which procurement payments was made.

That was followed by another interesting session on Law Tech, and again the Indian Minister of Justice, Ravi Shankar Prasad mentioned their extensive use of technology to case manage and monitor. The UK delegation spoke of the advantages of bulk data handling and the need to get the use of Law Tech correct both technically and ethically. Singapore spoke of their initiative in creating online programmes which could simulate outcomes of cases or disputes. All in all very fascinating. After a break there was the opportunity for the observers to deliver their reports. The first report was delivered by Charles Makadawire of Malawi. This recounted the initiatives that the Commonwealth Magistrates and Judges Association had referred to in their report and did mention their involvement in the Latimer House working group.

The report from CALC was given on its behalf by Therese Perera and attracted no comment, and then there was an opportunity for me to deliver the Report of the Commonwealth Lawyers’ Association.

In that I briefly identified the organisational change whereby we had created four regional hubs with four regional Vice-Presidents. I mentioned the events that had been held in the Americas Hub, the Africa Hub and the European Hub and that in the Australasia Hub I was leaving their Law Ministers’ meeting to go to Malaysia and Singapore to participate in CLA events.

I mentioned the Child Brides project and the partnering with Human Dignity Trust and also mentioned how the CLA were in support of the publication, ‘Good Practice in Human Rights Compliant Sexual Offences Law’ in the Commonwealth brought about by the Equality & Justice Alliance. The next item I mentioned was the work (that Colin Nicholls principally had undertaken) regarding cyber crime and corruption. I described how the CLA were interested in ensuring continuing freedom of expression and how the ability to criticise often went hand in hand with the ability to fight corruption and to uphold the rule of law.

I described statements issued by the CLA where lawyers were placed in peril or were arrested or were otherwise not able to perform their function and I concluded by referencing the Latimer House toolkit and how there had been an exhortation to roll this out. I repeated this exhortation to the Secretariat and looked forward to the CLA playing its fullest role in that task. I said that when I had spoken to the Commonwealth Parliamentarians meeting in Kampala, Uganda I had experienced enormous interest from parliamentarians in the fact that a Latimer House toolkit existed – this interest particularly coming from small jurisdictions.

The Law Ministers then met in private session agreeing their statements and outcomes for the meeting and I was then the last surviving observer to be allowed in to the closing aspects of the meeting where particularly moving tributes were paid to Katalina Sapolu, the outgoing Director of the CLA who was returning to her home country of Samoa. Other tributes were paid to her, to the Chair of the meeting, and to the Commonwealth Secretary General, the Honourable Baroness Scotland QC.

On a personal note Baroness Scotland was particularly attentive to me recalling with great fondness her attendance at the CLA Conference in Livingstone – remembering as a highlight of that Conference her formal opening of the school classroom for the Zambezi Sunrise Trust, and sharing with me how she had returned to the school quietly the following day to interact with the teachers and pupils again.

All in all this was an opportunity to see how decisions were made within the Commonwealth, to interact with Law Ministers, to allow the Commonwealth Lawyers’ Association to have its voice, and of course to forge links not only with the Secretary General, but also numerous members of her staff all of whom seemed to appreciate various interactions and feedback from me. I found it a worthwhile and impressive meeting with much to take forward into the business and goals and aims for the CLA in the coming months.