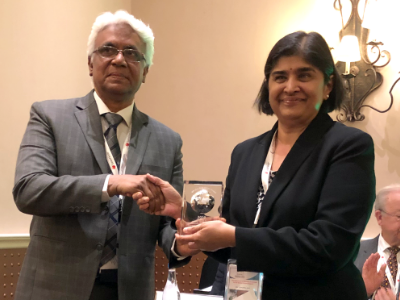 The 2019 LexisNexis Rule of Law Award has been awarded to Ambiga Sreenevasan. Ambiga Sreenevasan has been a fearless advocate of human rights and the rule of law for more than two decades. She has the ability to bring people together and empower them to create a better Malaysia.

In 2007, when she was Bar Council President, she organized the “Walk for Justice”, where lawyers protested political interference in the judiciary. She led the Coalition for Free and Fair Elections (Bersih 2.0) from 2010 to 2013, which held some of the largest rallies in Malaysian history, calling for electoral reform.

During this time, Ambiga also represented and assisted human rights defenders such as student activist Adam Adli who was charged with sedition and former Bersih2.0 chairperson Maria Chin Abdullah who was detained under the Security Offenses (Special Measures) Act. Ambiga also acted for the Bar Council to challenge the constitutionality of the extensions of the then Chief Justice and President of the Court of Appeal beyond their mandatory retirement ages.

Ambiga was the National Human Rights Society (Hakam) president from 2014 to 2018. As Hakam president, Ambiga monitored and regularly issued statements on human rights issues such as deaths in custody, abuse of power and media freedom.

Ambiga also lobbied against the National Security Act 2016 which gave unparalleled powers to the Prime Minister to impose emergency-like conditions in a specified area. It was a difficult time generally for human rights defenders as the then Prime Minister was also facing the 1MDB financial scandal and there was the fear of the misuse of powers to preserve the status quo.
It was through the activism and public representation of people like Ambiga that Malaysia witnessed a historic change of government on the 9th May 2018 general election.

In May 2018, Ambiga was appointed by the new government to the five-member Institutional Reforms Committee. The Committee held public consultations and submitted its report to the prime minister on key reforms needed to public institutions such as Parliament, the Election Commission, the Judiciary, the police and the Human Rights Commission of Malaysia.

Ambiga was appointed in July 2018 as a Commissioner of the International Commission of Jurists, the first Malaysian woman to receive this honour. She has received numerous international awards for her activism, including from the US and French governments as well as the United Nations.

In her work, Ambiga had received death threats, attack on her residence and subjected to investigation for her involvement in democracy and human rights matters. None of this has deterred Ambiga from speaking up for justice and she continues to do so without fear or favour, and with integrity and humility.