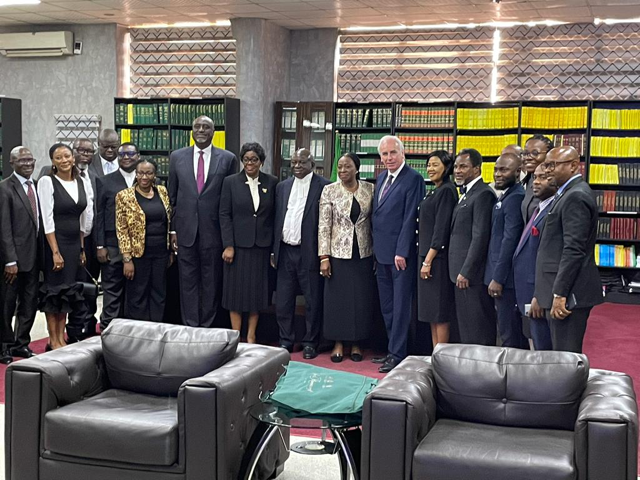 On Wednesday 16th November I left a cold and overcast Heathrow early in the morning to fly to Frankfurt and then connect on a flight to Abuja, the capital of Nigeria.

I arrived in Abuja in the late afternoon and was met by the President’s senior administrative assistant Chinaecherem Nwauban. I was also met by the Protocol Officer of the Nigerian Bar, who had arranged secure transport to take me from the airport to the Transcorp Hilton Hotel in the centre of Abuja where I was invited for dinner with NBA President Yakubu Maikyau, Mr Augustine Alegeh SAN a former President of the Nigerian Bar and other NBA council members.

As the meal came to a conclusion, we all engaged in a fascinating discussion about legal profession regulation.

The Nigerian Bar Association are the recognised sole regulator of the legal profession in Nigeria and as such, are in effect the largest regulators of a legal profession in the Commonwealth. One of the goals of my visit was to acknowledge the important position the NBA should occupy in the CLA.

Extensive photographs were taken and we then exited for our next stop which was with the President of the Court of Appeal of Nigeria.

The Hon.Justice Monica Dongban-Mensem had arranged for one of her Court of Appeal colleagues to meet with me and again a greeting was brought on behalf of the CLA and photographs were taken.

I was then privileged to attend a meeting of the Nigerian Bar to establish a Committee to fund raise for the disaster and flood relief arising from flooding in Nigeria.

The Committee assembled was convened under the Chair of Yusuf Ali, a former CLA Council Member for Nigeria. He brought his typical energy to the matter and the Committee was duly inaugurated.

After that, we headed quickly to the office of the Minister of Justice and Attorney General for Nigeria, the Honourable Abubakar Malami SAN. We were joined by the Director of Public Prosecutions and by the Secretary General of the Nigerian Bar and had a significant interaction with the Honourable Minister for Justice. I pointed out that I would be attending the Commonwealth Law Ministers Conference the following week and would make contributions relating to child marriage, independence of the judiciary, media freedom and mediation and he responded to each of those topics in turn giving his Nigerian perspective.

We then returned to the Hilton for lunch with nearly all of the NBA Council and I was pleased to speak to them expanding on some of the discussions concerning legal profession regulation.

President Maikyau then had to leave to get to Port Harcourt and I was pleased to interact with more or less every one of the Bar Council who remained. I particularly enjoyed my interaction with Mr Agada Elachi who was the President of the Nigeria Mediation Institute.

By then it was time for me to head back to the airport in which I had just arrived only 24 hours previously.

This was a packed agenda but most rewarding. It was an opportunity of course to promote Goa to the Nigerian Bar and to encourage their attendance in numbers at our CLC in March. Perhaps even more importantly it was an opportunity to show support for the NBA and to express appreciation for their support of the CLA and to encourage them to take even more of a leadership role within the CLA.