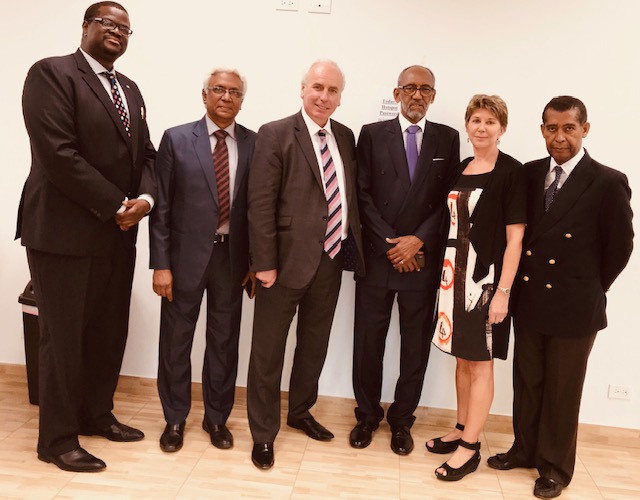 In addition to Laurie Pawlitza, Laurie Stoltz and Sandra Wilkinson of Toronto and Vancouver respectively were also in attendance.

Having been warmly welcomed by the Bahamas Bar Association, Laurie Pawlitza presented the new CLA PowerPoint presentation explaining the goal purpose and organisation of the CLA.  She asked Brian Speers to supplement her presentation by explaining some of the projects that CLA were involved in.  Brian took the opportunity of mentioning the imminent publication of the “girls not brides” project.  In addition, he mentioned the Latimer House project and available expertise of the CLA in cybercrime issues.

This presentation followed a presentation by Delano Bart QC on Commissions of Enquiry.  Mr. Bart is a well-known senior lawyer from St Kitts and Nevis and had chaired a Commission of Enquiry into a matter of significant public interest in the Bahamas concerning contaminated blood.  He asked Laurie Stoltz to supplement his comments by contributing her own observations from a similar enquiry in Canada.

Brian Speers then made a presentation on mediation across the Commonwealth and informed those present that the CLA had provided training for law associations in mediation.

The meeting concluded with a lively question and answer session.  Among queries raised was the independence of the judiciary, judicial appointment and concerning the independence of state prosecution services.  There were several contributions from the floor and many provided their contact details which will be followed up as CLA seeks to expand its membership in the jurisdiction of the Commonwealth of the Bahamas.

After concluding remarks from Dr Peter Maynard, CLA Council member the Bar Association of the Bahamas were generous in their hospitality over lunch allowing the CLA visitors from Canada, India and Northern Ireland to mingle with the local lawyers.  This was a most successful inaugural hub meeting with a clear commitment for ongoing contact between the Bar Association of the Bahamas and in the Caribbean with lawyers in Canada.  Thanks must be extended to Laurie Pawlitza and to Dr Peter Maynard. For organising such an engaging Americas Hub meeting.