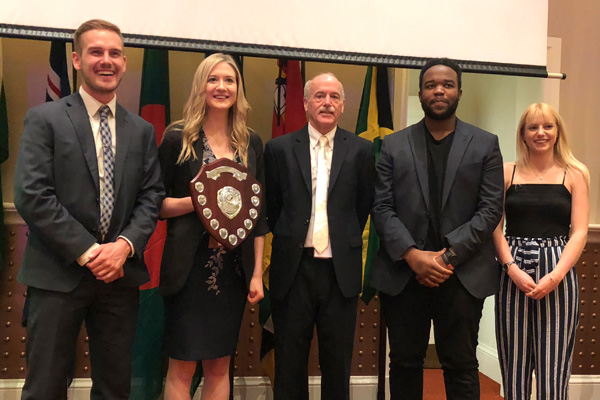 Hosted at the CLC, winners of the Commonwealth CLEA Moot Shield were the Canada team. It was a close competition, with some notable points raised. Huge congratulations go to the winners, seen above with their award.

The Moots went very well and on several occasions during the early rounds and the quarter-final, semi-final and final rounds, the judges commented on what a pleasure it was to have the young aspirant lawyers appear before them. The spirit of comradeship amongst the Moot participants was also a joy to behold. No doubt many of them will have established enduring friendships that will stand them in good stead in their future careers when they may need to find a correspondent lawyer in one of the participating Commonwealth countries.

Even though they did not make the final, the Australian team need to be congratulated for reaching the semi-final despite not being accompanied by their coach. Likewise, the Zambian team who were a ‘wild card’ team as hosts, and the Zimbabwe team that only had one week to prepare, should be congratulated for their good performances in the preliminary rounds.

CLEA would like to thank all the judges who willingly gave up their time to preside in the moots; LexisNexis for providing the prizes; and the Zambian Law Society for hosting the Moots and providing the court officials, and arranging free accommodation and local transport for the Moot participants.

Photo: Winning Canadian team Dylan Hanwell and Leah Strand with Nigel Roberts of Lexis Nexis and runners up Jafar Iman and Emma Clarke of the University of Salford, UK.