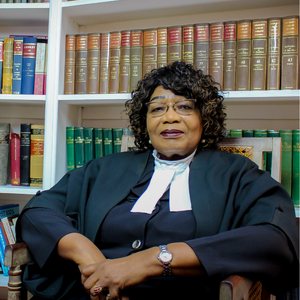 St Vincent and The Grenadines

RENÉ MERCEDES BAPTISTE CMG is a Vincentian Lawyer. She entered the Faculty of Law, UWI Barbados in 1971; graduated with Second Class Honours in 1974 – LL.B; attended the Hugh Wooding Law School, Trinidad 1974 – 1976 and obtained the Certificate of Legal Education – L.E.C.

Called to the Bar in St. Vincent and the Grenadines in October, 1976, she was tasked with the establishment of Offshore Services Authority – The Trust Authority and headed it for the first 10 years of its operations. During that time she served on the CARICOM Committee for the Harmonisation of Companies Laws in The Caribbean.

She subsequently opened her Solo Law Practice in 1986 and converted to a Law Firm in 2001 when she was elected to Parliamentary office as an M.P and Cabinet Minister.

During the period 1976 – 2001 she wrote a number of articles for Finance journals; lectured across communities in St. Vincent mainly in Family Law; served as a Radio Panelist on legal subjects. As an elected M.P from 2001 – 2010 she served on the three Parliamentary Committees: The Rules Committee, The Finance Committee and the Public Accounts Committee; during that period she also chaired several Selected Committees; tabled a number of bills; debated motions and resolutions, and wrote many SRO’s.

She returned to her Law Firm Baptiste & Co. in 2011 and continue to manage the Firm with 3 young Counsel – Michaela Ambrose, Mikhail Charles and Dr. Jason Haynes.

Dr. Haynes is a Mediator and Accredited Arbitrator. Charles and Ambrose are Notaries Public. Miss. Baptiste is a Notary and Certified Mediator.

As a Commonwealth Election Observer in Nigeria in 2011 and Uganda in 2016 has certainly provided me more insight into Electoral Management Systems.

Her interest is in Continuing Legal Education and Professional Development to meet the emerging needs of transnational and cross-border activities of international business community, trade, investment and Finance. It is her hope that her membership of the Council would enable practitioners from the Eastern Caribbean Supreme Court to benefit from the pool of legal knowledge that resides within the Commonwealth as this Region moves towards developing the Blue Economy; Climate Change and the need to be an active part of the new legal network of the Commonwealth.

Her Law Firm is the Collaborating Firm in St. Vincent and the Grenadines for ANDERSEN GLOBAL, U.S.A and Biswajit Sarkar IP Law Firm, India.